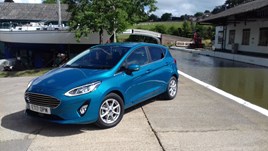 Registrations in the true fleet market have fallen for the fifth consecutive month, reducing by 10.0% for August or 2.9% year-to-date.

The total market, while achieving 76,000 registrations, was down by 6.4%, says Dataforce.

Special channels accumulated the unwanted growth of 20.9% as OEMs and dealerships increased their registrations by 38.8% to the highest volume on record for August.

On the true fleet OEM level, not everyone was in depression, two manufacturers inside the top 10 bucked the trend and achieved 20% plus growth rates and only 63 registrations separated ninth to 12th. Ford were first, with Vauxhall second.

Volkswagen rose two places with + 27.0% into third position with Mercedes-Benz in fifth, swapping places with them.

Audi, meanwhile, retained fourth position for the fourth year in a row. BMW and Nissan remained sixth and seventh respectively and were followed by Kia in eighth whiched jump two places in the ranking.