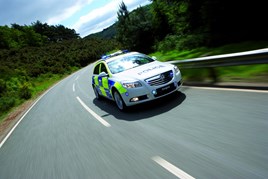 New legislation that could put drivers behind bars for life for causing death by speeding, street racing or while on a mobile phone has been announced by the Government.

The move has been welcomed by road safety charity IAM RoadSmart – but it has warned that the threat of jail alone is unlikely to make people drive in a less dangerous way.

The Government launched a consultation on the issue last December, with thousands supporting tougher penalties for the most serious road offences.

IAM RoadSmart’s own survey in February this year found nearly 80% agreed there should be a new offence of causing serious injury by careless driving – which is now part of the Government’s plans.

Many respondents in the IAM RoadSmart survey also felt the current maximum penalty of 14 years in jail for causing death by dangerous driving wasn’t nearly high enough; with almost 50% saying the penalty was not set at the right level.

The Government will now proceed with the measures, which will see life sentences introduced for those convicted of causing death by dangerous driving and causing death by careless driving while under the influence of drink or drugs.

The issue was brought into sharp focus with the jailing of Tomasz Kroker for 10 years in October 2016. Kroker killed a mother and three children when he was distracted by changing music on his smartphone and ploughed into a line of stationary traffic in his lorry.

Neil Greig, IAM RoadSmart director of policy and research, said: “The public has been calling for stricter penalties for those who cause death by driving recklessly, and the moves today by the Government are wholeheartedly welcomed.

“However we feel that visible policing, and a high likelihood of being caught, is the surest way of making people drive better. If people don’t think they will be caught, they simply won’t drive in a safer way.”

He added: “It is also vital that courts reflect society’s view on the impact of dangerous driving and use the maximum available sentences – something they have so far not demonstrated on a consistent basis. While a toughening of the law might make people feel better, on its own it is sadly unlikely to reduce the number of cases of really selfish driving which end in tragic results.”

More than 17,000 drivers have been convicted of careless driving since police forces were given the power to issue fixed penalty notices for the offence two years ago.

Number of motorists killed who were involved in a police pursuit has risen 50%.

No current plans to extend to rest of UK but NPCC keeps eye on developments.