The reduction continues a trend that suggests contract hire providers are becoming more savvy at identifying higher mileage early and working with their customers to help avoid big charges at the end of the term, while the percentage of cars subject to the charges remains the same as in 2016.

FN50 companies reported 19% of cars faced excess mileage charges this year, the same as in 2016, and at almost half the level reported when the survey first included the question in 2005, when 36% of defleeted vehicles were affected.

It also represents a substantial reduction from the peak of £540 in 2012, when 22% of cars were subject to charges.

The variance in average excess mileage charges is quite stark, with the lowest reported as £33 compared with the highest as £1,100.

The £33 figure is based on an average of 25% of the vehicle fleet, while the highest figure is calculated from 12% of the cars incurring excess mileage charges.

Figures show that 16 of the 28 FN50 companies reporting data in this section had average excess mileage charges of £350 or lower for cars, with only five stating averages of £500 and higher.

Last year’s report suggested that telematics and connected systems, where fitted, were helping keep track of vehicle mileage through the duration of contracts, and were playing a role in managing mileage more effectively.

It also suggested that while end of contract charges were falling, it was most likely through contract hire companies keeping track of mileage and discussing higher mileage than agreed with customers mid-term, and allowing flexibility to increase monthly rental rates to compensate so there would not be a large excess mileage bill at the end of the fleet lifecycle.

As the reduced charge trend continues, it would seem more fleets are on board with a more manageable way of addressing excess mileage without having to deal with the inconvenience of a large settlement at the end of the contract.

The strategy benefits the leasing companies with excess mileage being compensated for during the contract, and it helps fleet operators deal with the issue in what is a series of smaller excess charge payments.

There was a gulf in the highest and lowest proportions of the car fleets incurring the charges, with one contract hire company reporting excess mileage on 3.8% of its vehicles, while at the other end of the spectrum, another reported volume of 50%.

However, neither of the companies at the extremes recorded an average excess mileage charge for their vehicles. 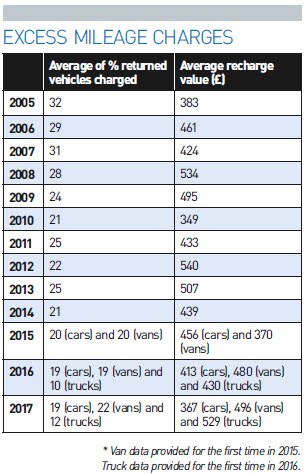 The data shows that 18 of the companies reported a proportion of 20% or lower of their cars incurred the charges, with six companies at 10% or lower.

Seven companies stated a proportion of their cars incurring excess mileage charges at 25% or greater.

While most of the companies that responded in this section of the survey appear to be dealing with a relatively small number of vehicles defleeting with mileage in excess of the agreement with the fleet operator, it would appear that a number of FN50 businesses could benefit from examining and addressing the problem with customers at an earlier stage.

Options would include discussing mileage with customers at routine meetings if not monitoring it through telematics, encouraging them to be transparent and realistic about the mileage, and being flexible in offering to amend the contract to compensate for the excess mileage before the end of the term.

‘Mileage pooling’, offered by some leasing companies, could also be a choice for fleet operators to help offset higher mileage vehicles with some achieving below the contracted mileage.

It would seem to be counter-intuitive to the trend of car charges falling, and for some of the reasons suggested that led to the reductions, as vans are more likely to be running telematics systems than cars.

The highest average charge dwarfs last year’s upper limit of £1,400 based on 8% of one of the contract hire company’s van parc.

Data shows 15 FN50 companies, of the 21 that responded to this question, had an average excess mileage charge of £500 or lower, with eight reporting an average of £300 or less.

Five companies stated average excess mileage charges of £750 or more, with three of them breaking the £1,000 barrier.

The percentage of returned vans with excess mileage ranges from 5.8% to 60%, although the company reporting the higher figure has not disclosed the average charge per vehicle.

The reason for penalties for exceeding agreed mileage is to compensate for the increased depreciation, and with predictions of weakening demand for new vehicles as evidenced in the second and third quarter of 2017, we could soon be in a situation where used car supply exceeds demand.

Residual value forecasters three or four years ago would have been unlikely to factor in the effect of the Brexit vote – as voting to leave the EU seemed a less realistic outcome of the referendum – and the drawn-out process of negotiation over the UK’s future trading relationship with the EU and the rest of the world, with a real possibility of no deal being struck by the time the UK leaves the EU.

It is likely resale values will weaken if the Brexit process is prolonged, and excess mileage will drive down values further.

It will be interesting to observe if the general trend of lower excess mileage charges continues in the next few years, or whether fleets begin to defer replacement of vehicles and renegotiate the contracts on existing company vehicles to use them for longer.

And whether technology to monitor mileage during terms more closely will help the trajectory continue in the same direction, in spite higher mileage vehicles arriving on the market.

Vans, in particular, are among the assets that sweat the most when organisations seek greater efficiency when circumstances force a review of costs.

Flexibility to extend contracts was commonplace during the last recession, but recharge values spiked for a couple of years in 2008 and 2009 before falling again in 2010.

If the methods and practices that have brought about lower excess mileage recharges are truly effective, they should reduce the risk of future spikes in values, and ensure customer expectations are managed.