Almost nine out of 10 (88%) of the 32 companies offering a forecast on used car values in the FN50 predict a fall in residual values (RVs) in 2018, with a small number expecting them to increase.

The pessimism has increased slightly on last year, when 85% were forecasting a fall in RVs. That failed to materialise as residuals held up well throughout 2017, surprising a number of pricing experts with their robustness. Nevertheless, the general consensus is that a downturn is coming next year.

Falling RVs, combined with the effects of a weak sterling, are likely to lead to rises in monthly contract hire rates, especially if the fallout from the second-half slowdown in new car sales results in manufacturers reconsidering volume aspirations for 2018.

Only two contract hire companies in the FN50, including one of the largest, predicted an improvement in residual values in 2018, contrary to the general trend.

Rather than a sunnier outlook on the car market, it could be based on decisions already taken or are planned that could change the make-up of their risk fleets.

However, both predict modest increases, resulting in an average rise of 3%. 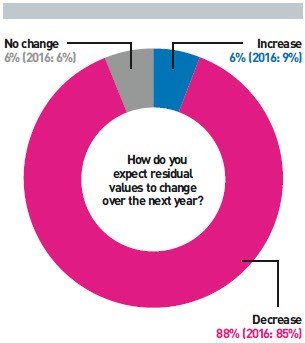 Although not making a forecast in its FN50 survey return, Alphabet points to a potential positive outcome for RVs from the reduction in new car sales this year, which is expected to continue into 2018.

Nick Brownrigg, Alphabet GB chief executive officer, said: “As we see the supply of new cars into the market adjusting to current market conditions, we expect this to result in used car values in the UK firming up.”

That “firming up” might not happen for a year or two, though. The new car market has broken registrations records in successive years and those cars are starting to return to market at a point when uncertainty is rising due to the lack of clarity over the Government’s Brexit negotiations with the EU, which could dampen demand.

Equally, the flood of manufacturer scrappage schemes introduced this year will pull potential used car buyers into new vehicles, reducing the pool of people in the market for cars aged three-to-four years old.

Arval managing director Benoit Dilly pointed to the fact that the record registrations were achieved through financial solutions meaning cars would return to market after an agreed term, typically two or three years.

“There will be plenty of cars on the market, probably in excess of what the market can absorb,” Dilly said.

“We can only see residual values going downwards and that means car leasing prices going upwards.”

An additional influence could come from a different quarter as the tax treatment of diesel vehicles comes under scrutiny in a bid to change buying behaviour and improve air quality. 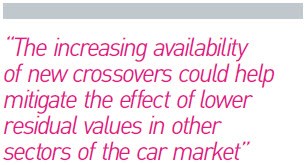 Although the car industry has belatedly begun to lobby in favour of Euro 6 diesel, and its merits over earlier technology, it might not be persuasive to a typical used car buyer, especially if the Government goes on to take new action to discourage the purchase or use of diesel cars.

Tim Porter, Lex Autolease managing director, said: “The diesel debate is a big challenge. Some 80% of our fleet is diesel and if the used value dips more than we anticipated, that will be a problem for the whole industry.”

Neverthless, Porter believes residual values will remain strong in the short-term and doesn’t foresee any ‘U’ or ‘V’ shaped collapse next year, although “we have provisions within our fleet to cope with that”, he added.

While most FN50 companies expect the average RVs of their cars to fall next year, the increasing availability of new crossovers, especially compact models that are new to the market, and seemingly desirable to some user-choosers, could help mitigate the effects of lower residual values in other sectors of the car market.

Many car manufacturers are introducing attractive and rugged-looking crossovers for the first time, joining a range of others already on the market. The compact models share engines and technology with small cars in their ranges and are affordable to run and offer low benefit-in-kind (BIK) tax.

The availability of these cars to fleet operators that might be using restricted badge policies could be welcome, and present more ways of contract hire companies spreading risk more evenly among more brands and vehicles.

An increasing range of petrol models, particularly in sectors that have been almost entirely diesel up to now, could offer additional ways to spread risk and reduce exposure to any negative news affecting diesel cars.

For now, most FN50 companies’ average resale values for cars are close to Cap Clean at remarketing time, with 18 of those who reported lower than Cap Clean showing figures within five percentage points.

Five companies reported reaching 100% of Cap Clean or higher, with one suggesting an average as high as 116%.

Failure to match the Cap Clean value could be the result of a number of issues, including excess wear and tear on cars at defleeting time that might not seem worth rectifying before disposal.

A penalty for excess wear and tear might well have been recovered from the fleet, but viewed as sufficient compensation for taking the hit on the value at auction.

If reaching an acceptable proportion of Cap Clean is an issue for any leasing company, it could be an opportunity to review remarketing processes and ensure the various channel options for disposal and end-of-life policies and procedures are achieving the appropriate values for vehicles more effectively.

Physical auctions remain the primary route to market for defleeted lease cars, with 45% of vehicles remarketed in this way, compared to 46% in 2016 and 47% in 2015.

Despite all the hype surrounding online auctions, they remain largely static at 6% of all vehicles (2016: 7%).

This is surprisingly low given the level of online sales for other commodities and the familiarity many consumers have with buying or selling using online auctions and the maturity of the technology.

Almost a quarter of vehicles are sold direct to dealers with 19 of the 30 respondents using this route to the used car market as one of their options. And for those 19 companies, 41% of their business is remarketed in this way.

Some of the heaviest users of dealers are, not surprisingly, manufacturer- and dealer-owned leasing companies, plus specialist funders.

Twelve companies opt to go direct to the public when remarketing their cars. While this route only accounts for a small proportion of total FN50 business, at 15%, those who do use it remarket 38% of cars in this way.

These tend to be concentrated among the smaller contract hire companies. Just two are inside the top 25. 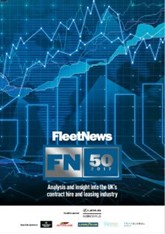