It was, by anyone’s measure, a bold objective. The company was targeting 375,000 vehicles, making it the biggest contract hire and leasing company the UK has seen.

In September, Porter announced his goal had been achieved; Lex Autolease sits atop the FN50 with a risk fleet of 381,833 cars and vans – up 15% year-on-year. Just eight of the top 50 can boast a faster rate of growth on 2016, but all of those are from much smaller starting points.

Speaking recently to Fleet News, Porter said that his aspiration now is to focus on “sustainable growth”. He believes there are opportunities in all key channels, including small-to-medium enterprise (SME), corporate and public sector.

Lex Autolease’s rate of growth was almost double that of the FN50 as a whole, which rose by 7.8%.

In the face of declining new car registrations, where is this growth coming from?

Primarily, a combination of salary sacrifice (up more than 10,000 cars year-on-year) and greater penetration into the retail sector with personal contract hire (PCH) deals.

Many leasing companies report growth in PCH business through SMEs, owner-drivers and employees opting for cash allowances, evidence of their ability to cast the net wider to capture a larger slice of the total car funding market – either direct or via brokers.

Consequently, the average split of business-to-private funded cars has swung slightly towards private, from 87:13 to 85:15. This equates to a year-on-year increase of more than 36,000 cars.

Despite the hysteria around salary sacrifice following the Government-revised rules and various industry (mis)interpretations, the number of cars funded this way has increased from 49,000 in 2016 to 61,200 this year. 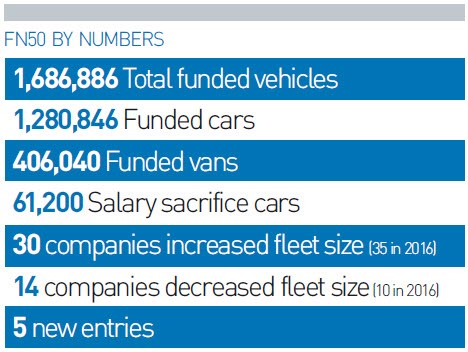 Tusker is reporting strong growth, up 8% year-on-year to 20,593, of which 91% are salary sacrifice. The company moves up two places to 12th.

Of the newcomers, RCI returns to the listing after an absence of seven years. The financial services specialist for the Renault-Nissan group (including Dacia and Infiniti) was outsourced in 2010 to Arval, but brought back in-house in mid-2014.

The Arval-funded vehicles have now washed through the de-fleet process, marking RCI’s return to the FN50.

Two manufacturers decided the time was right to rebrand their leasing operations.

Leasys (formerly FCA Fleet Services) now sits under Fiat Chrysler Automobiles’s European leasing brand, which will open the door to cross-border contracts as well as a move into multi-marque funding.

It has been the UK’s fastest growing leasing company in recent years, buoyed by strong activity in its SME heartland.

Roberto Bellavia, newly-appointed head of Leasys UK, is looking to double the fleet size by 2020 with a bold target of 20,000 vehicles. Corporate business is one option for growth.

“If our target will be the large corporate accounts, we have to manage multi-marque business,” Bellavia says.

Free2Move Lease is a merger of Citroën Contract Motoring and Peugeot Contract Hire and will also pave the way to multi-marque funding for Peugeot and Citroën.

However, it was created primarily to fulfil PSA Group’s aspirations to become a mobility provider, bringing together car sharing, connected services, fleet services and leasing.

That’s one for next year and beyond, though. For now, Free2Move Lease is focusing on strengthening its core leasing business, according to UK managing director Duncan Chumley.

“Our focus is to use the strength of both organisations to create a stronger leasing company and a better proposition for our customers,” he said.

Chumley expects the SME channel to “remain the backbone” of the new enterprise as the majority of business has traditionally been through the dealer networks.

While Leasys and Free2Move Lease were busying themselves with their respective rebrands, the year’s biggest news came in the past couple of months, with the announcement that Marshall Motor Holdings was to sell Marshall Leasing to Bank of Ireland UK for £42.5 million.

It’s a good move for the leasing company (subject to FCA regulatory approval) which was not viewed as a priority by the franchised dealer group. Despite being profitable and regularly contributing pre-tax sums of £5m to the family-owned business, Marshall Leasing did not benefit from an ‘invest to grow’ policy.

Its strategy was retain rather than expand, focusing on delivering outstanding customer service. Consequently, the company, which this year reported a risk fleet of 6,470 vehicles, has added fewer than 1,300 vehicles over the past decade – possibly the lowest growth rate of any current FN50 organisation.

Expect to see a more assertive approach to business acquisition over the coming years – although chief executive Peter Cakebread, who, together with his management team, will remain with the company, will be careful to ensure service standards do not slip. 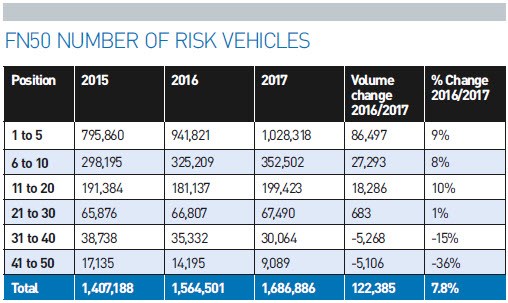 Cars continue to dominate the FN50 at 75.9% of the total, marginally down on last year’s 76.8%. However, several leasing companies have expressed a desire to boost their van portfolios, including Alphabet, which lags behind its nearest competitors with vans accounting for just 12% of its fleet.

Nick Brownrigg, Alphabet UK chief executive officer, says: “We would like more LCVs on our fleet because the product type sells very well within our overall mix. That’s a focus.”

For the first time, the five biggest leasing companies account for more than one million vehicles. They now fund 61% of the cars and vans in the FN50.

Lex Autolease, LeasePlan, Volkswagen Financial Services, Arval and Alphabet have a combined fleet size equivalent to that of the entire top 10 from just three years ago (2014). As recently as 2010, the top five accounted for just half of the FN50, illustrating the rapid growth.

However, this year only one top five leasing company aside from Lex Autolease saw a significant increase in fleet size – Volkswagen Financial Services (VWFS). Its rise of 28,520 (21% – the fifth highest of 2017) follows the appointment of four corporate sales managers in 2016.

That goes against the grain, with van funding within the FN50 as a whole up 43,482 (12%) year-on-year, mirroring the wider registrations trend for light commercial vehicles.