The total number of charges incurred by vehicles on contract hire in 2017 has reached a record level, with the amount paid reaching almost £20 million.

But with only around half the companies in the FN50 reporting data, the true number of charges and the cost to fleets is likely to be substantially higher.

The FN50 survey asked contract hire companies to report the number of charges and fines for speeding, parking, congestion charge and others, including the amount.

It is difficult to compare like-with-like with previous years accurately as not all the same companies reveal the information for each fine category. That said, the large increases this year are from a similar number of companies giving data.

Even if charges are passed on to the fleet using the vehicle or the driver, the figures show the administrative burden for contract hire companies is increasing, with the total number more than 20,000 higher than in 2016.

If the contract hire industry is urging its customers to educate drivers on best practice and good behaviour behind the wheel, evidence, in relation to fines at least, suggests it is not working and more needs to be done.

The number of speeding fines recorded in 2017 was 128,769, which is 5% lower than the 135,212 stated in 2016. Fewer notices of intended prosecution than last year could mean fleet operators and drivers are more aware of the risks of speeding, with totting up of points on driving licences putting employees’ jobs in danger.

The technology uses a forward-facing camera to observe the most recent speed limit sign passed and show the speed limit on the dashboard screen or in the instrument panel. It means drivers that might have been distracted when the vehicle passed a speed limit sign gain an extra reminder upon checking the dashboard displays. And the latest adaptive cruise control systems can also adjust gradually when entering a lower speed limit zone.

While some of these features are not yet widespread, they will become increasingly common and should, in theory, help reduce the incidences of unintentional speeding.

However, that is tiny compared to the total number of parking penalties issued by local authorities to all motorists each year, which are estimated at eight million, according to RAC Foundation research. 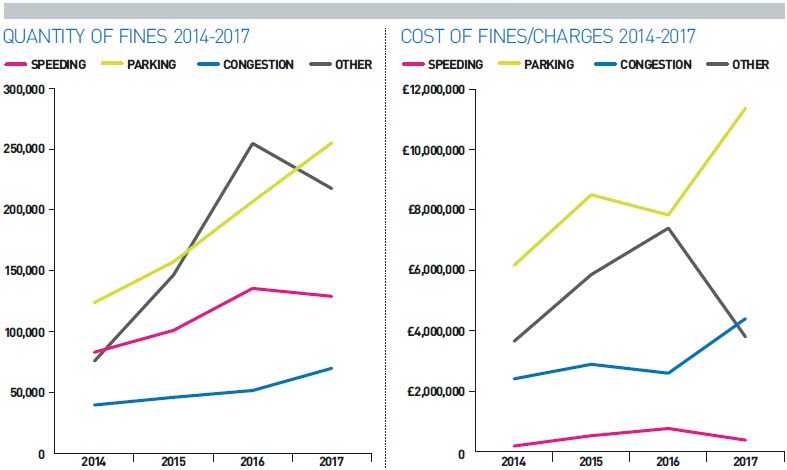 Local authorities have faced budget cuts in recent years as Government austerity policies have taken effect, forcing a reduction in services they provide. Parking charges, and fines, could be seen by them as valuable ways to make up for some of their funding shortfalls.

The administration of parking charges on private land has been an issue for fleet operators, but ultimately better education of drivers over where they can park their vehicles and for how long would remain the most effective weapon in bringing down costs.

Cases of misidentified vehicles, sparking a laborious process of contesting parking charges are all too frequent, although dashcams and GPS data from telematics can be important tools in providing evidence of misidentification.

However, they would do little to alleviate the administrative burden on contract hire companies, with evidence usually required to support proof of innocence.

This is an escalating trend and it’s difficult to see how it might abate in the future. The congestion charge zone in London has increased in size since its introduction, and there have been calls to expand it to include the areas within the North Circular and South Circular roads.

In future the so-called T-charge for higher polluting older vehicles will come into force, adding an extra layer to the administration, although Euro 6-compliant vehicles – which most fleets will be running – will not be subject to the extra charge.

But errors will inevitably continue and contract hire companies are still left committing resources to correcting them or accepting the fines and passing them on to the fleet.

Other cities in the UK are also considering introducing their own charging zones, although we still await announcements regarding which areas might launch them and when.

Much will depend on the local political appetite to introduce them and, if so, how the charge might be implemented – whether it would affect vehicles of a specific type, and if there would be discounts or exemptions for essential users or those choosing ultra-low or zero-emission vehicles.

But any additional congestion charge zones will increase the likelihood of fine notices being received by contract hire companies and the burden of dealing with them.

Other fines, including bridge tolls such as the Dartford Crossing, as well as non-payment of charges not covered elsewhere, such as bus lane infringements, were lower than in 2016.

ACFO had made representations with Dart, the organisation that runs the Dartford Crossing charge system, over problems fleets had with the administration of charges and fines, and Dart has launched a series of improvements to its charging website starting this summer.

It is possible that the changes, which make the site easier to use, will help reduce fines administered in error in future.

In addition, fines from charges at the M4 and M48 crossings over the River Severn will cease in future, as the bridge tolls will be abolished by the end of next year.

While there is pressure on drivers to meet targets during their working days, which will always increase the risk of incurring fines, it is difficult to see a better method of avoiding them than improving education of drivers and fleets.

With improving vehicle technology that can help avoid unintentional speeding and fewer bridge tolls on the horizon, there could be fewer fines in some areas in future. And repeat offenders in speeding will have a direct impact on the driver’s employer if problems go unchecked.

How drivers can be coached to take advantage of opportunities to reduce costs and administration will still be in the control of fleet customers, but contract hire companies also need to ensure they impress upon clients how taking responsibility for this will result in fewer headaches for all parties.