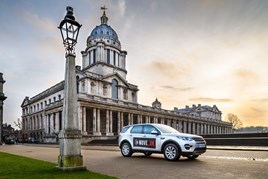 Lower insurance premiums and gradual acceptance of semi-autonomous features will create demand for self-driving cars in the future, according to the consortium behind a technology trial in London.

The Land Rover Discovery Sport models are 2.0-litre diesel automatic versions. They are used as pool cars for Greenwich council workers, who remain in command of the vehicle’s functions at all times, but computers measure their responses and reactions compared with how the car’s technology would have behaved.

The first phase of the trial, based on what the car’s forward-facing camera detects, is now ending, with a second phase, adding radar to the cars, getting under way. The final phase of the trial is scheduled for completion in May 2019, with the final report delivered two months later.

Other cities across the world are also involved in autonomous vehicle trials, and the consortium hopes the Greenwich study will provide valuable data.

Dan Freedman, director of motor development at Direct Line Group, responded to criticism that autonomous vehicle development is lacking in consumer enthusiasm saying: “We are at an early stage on the path to autonomous driving, but we will arrive at a consensus as people are gradually exposed to the various elements of the technology incrementally, and get more used to the convenience and the safety benefits.

“There will be lower insurance premiums for customers making the choice and, while we haven’t quite worked out the mechanics of that yet, there will definitely be an incentive.

“Scepticism is declining and many people now see the value in what the technology is capable of, especially in giving back time to the driver.”

Trevor Dorling, managing director of Digital Greenwich, added: “There are a lot of changes happening in cities now where we’re having to deal with the economics of scale. There is growth in car sharing, and car ownership models are changing.

“Driving is not a pleasurable experience in many cities and, as we try to optimise the infrastructure in cities, putting more vehicles on the roads is not a solution.

“We are also interested in the interplay between autonomous vehicles and public transport. For example, wouldn’t it be preferable for someone attending a doctor’s appointment to be picked up from their home in an autonomous vehicle and arrive at the surgery just in time for the doctor to see them?”

The trial in Greenwich is funded jointly by the UK Government through the £100 million Intelligent Mobility Fund, and the consortium partners.

Bosch UK is the lead partner in Move UK, providing the sensors and systems for data collection and preparing the vehicles for the trials. Bosch is also central to developing and installing the cloud software and data analysis tools.

Simon Morley, lead project manager at Bosch UK, said: “These real-world trials of a new method of validating automated driving systems is important, and wouldn’t have been possible in this way a few years ago.

“Vehicles generate about 1,000 different signals and we’re recording about 250 of them in this project. When events are triggered, data is recorded and we have immediate accessibility.”

TRL is responsible for managing the trials, hosting the UK-based server, software support, and data analysis. TRL plans to use the ‘Big Data’ resource produced to create an evidence base for future regulatory and type-approval requirements. Move UK is taking place in TRL’s UK Smart Mobility Living Lab in the Royal Borough of Greenwich.

Richard Cuerden, technical director for vehicle safety at TRL, said: “We can improve algorithms for autonomous vehicles based on real-world testing. We are trying to understand the driver intention and the vehicle’s autonomous technology intention simultaneously.”

The Floow is providing automatics telematics know-how and plans to use the data collected to improve telematics risk understanding and grow insurance analytics to better support future autonomous vehicles.

LeasePlan aims to take the lead in EVs and autonomous cars

LeasePlan is looking to lead the industry in areas like electric cars, cars-as-a-service and autonomous vehicles with a new company strategy called What’s Next.

Nissan demonstrates fully autonomous car in Tokyo – due for 2020 release

Nissan has demonstrated a prototype of its most advanced autonomous driving technology, planned for real-world use from 2020, on public roads in Tokyo.

Groupe Renault has developed an autonomous control system that can demonstrate road obstacle avoidance to the same level as professional test drivers.