Slowing retail demand and an increase in wholesale stock availability pushed used car values down by 2% in November, at three years 60,000 miles, according to vehicle data experts Cap HPI.

“The higher than usual drop in nearly new stock is attributed to the additional volumes of short-term rental business that had been written in the first half of the year entering the wholesale market.”

Older vehicles values at five years 80,000 miles saw an average reduction of 1.9% but the 10 years 100,000 miles category only saw a downward movement of 1.0% as fewer older cars appeared in the wholesale market.

The electric sector showed an above average increase driven by a small number of models.

Dower said: “The performance of the Renault Zoe electric, Peugeot Ion and Hyundai Ioniq all illustrated how this market is beginning to gain traction.”

The lower medium sector saw an overall downward movement of 2.5% at three years 60,000 miles, due to increased volumes of ex-contract hire and leasing examples in the wholesale market.

Newer vehicles at six months 5,000 miles and 12 months 10,000 miles saw greater pressure with values falling by 2.9% and 2.8% respectively as volumes increased due to rental registrations.

Performance by fuel type at three years 60,000 miles showed the relative strength of petrol hybrid which only saw values move back by 0.6%; petrol saw an erosion of 1.8% and diesel 2.3%.

Dower concluded: “Many of the larger groups and supermarkets will be looking for value and will remain actively buying throughout the month and there will also be some vendors who are keen to ensure that their end of year stock targets are achieved.

“Black book live will continue to report on the daily market moves and will offer its subscribers the best possible intelligence for purchase and disposal decisions.” 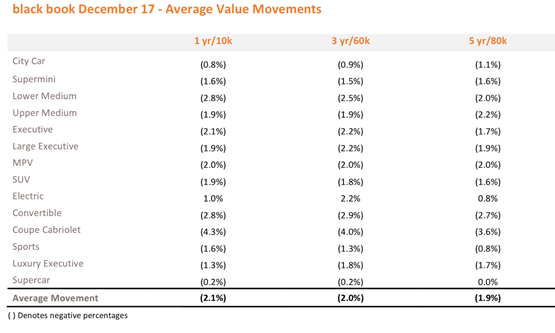