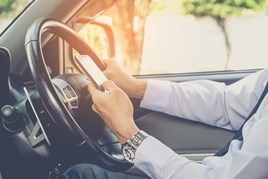 The number of drivers caught using a handheld phone while driving fell by 11% in the three months after the introduction of tougher penalties compared to three months before, new data seen by the RAC shows.

The RAC collected the data after making a Freedom of Information request to UK police forces, with 38 forces responding.

The sharpest percentage fall in the number of drivers caught was in the City of London police force area with just 41 drivers stopped after the new penalties came in, down from 124 who were caught in the three months prior (a 67% fall).

The data comes just months after research for the 2017 RAC Report on Motoring highlighted how a hard core of more than nine million motorists continue to persist using a handheld phone while they are driving.

The number admitting to making or receiving calls illegally was at 23%, down from 31% in 2016, but of those questioned about the new penalties 15% - or an estimated 5.3m drivers – said they had not changed their habits at all.

RAC road safety spokesman Pete Williams said: “It is still much too early to tell if the stricter penalties that were introduced in the spring are changing drivers’ behaviour, but these figures perhaps give hope that at least some are starting to get the message that driving and using a handheld phone to talk, text or tweet don’t mix.

“Following the introduction of tougher penalties for using a handheld phone at the wheel from March, we know police forces are running regular targeted campaigns to catch offenders – so one way of reading these new figures is to say that this activity, at least in some parts of the country, is beginning to yield results.

"But the flipside to this is the possibility that enforcement levels are still much lower than they need to be to stamp out this illegal activity."

Williams suggested that the low overall numbers represent "the tip of the iceberg".

He said: "RAC research suggests that there is still a hard core of more than nine million motorists that think it’s acceptable to text, talk or even take video while they are meant to be focused on driving. So while we don’t know how many police hours were spent enforcing the law from March, it may be the case that lower numbers of drivers being caught simply reflects a lower level of enforcement in some areas – and the opposite may be true with those forces that caught more drivers.

“The severe cuts in the number of dedicated roads policing officers across the UK, down 27% in the five years to 2015, continues to be a major source of concern.

"We expect it will be having an impact on enforcement levels – not least because catching people committing the crime of using a handheld phone at the wheel relies on officers observing drivers’ behaviour. There is, as yet, no automated way of catching offenders like there is when it comes to speeding.

“Regardless of the reasons for the fall in offenders being caught, it is clear there is still an enormous job to be done to show to drivers that persist in using a handheld phone that it is both against the law and extremely dangerous.

Cases of use hand-held mobile phones by police forces