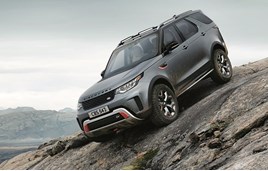 Land Rover's share of the true fleet market hit a record high of 2.5% in November, analysis by Dataforce has shown.

The true fleet market fell for the eight consecutive month, with November registrations 15.6% down on the same month in 2016. This accentuated the decline of the total market where registrations dropped 11.2%.

Dataforce said that with the depreciation of sterling continuing and the Government seeking to raise taxes on diesel there is little chance to see the market segment returning into the black any time soon.

However, it found a "maybe surprisingly large number of increases in our analysis on both brand and model level".

A Dataforce spokesman said: "Land Rover managed to increase fleet sales for five out of its six models, upping its true fleet share to 2.5% for their home market, the highest since Dataforce's recordings began."

Elsewhere, having a strong seller in the compact car segment helped a couple of brands record an above-average performance, said Dataforce.

Dataforce said further credits for high growth both in terms of volume and percentage goes to the Hyundai Ionic that was starting out just a year ago, the Seat Leon (+ 23.4%), the Honda Civic (+23.5%) and the Kia Ceed (+ 19.8%).

The spokesman added: "Some of these were clearly absorbing volume from Astra, capitalising on Vauxhall’s sharp strategy shift toward increasing sales margins."

A significant step up in comfort, refinement and efficiency over predecessor

Jaguar Land Rover has made a commitment that from 2020 all its new vehicle ranges will be available with electrified powertrains.