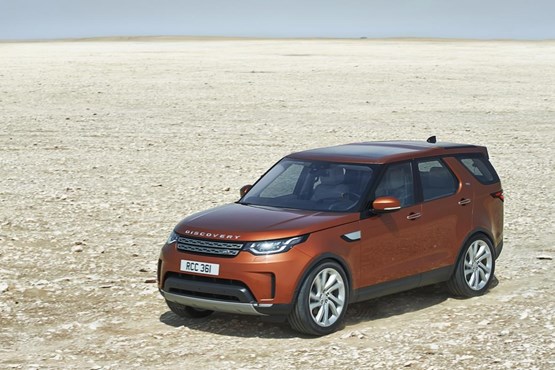 Land Rover’s move upmarket and away from the utilitarian models of its past has continued with the new Discovery, its plushest vehicle yet.

With plenty of room for seven adults, the fifth-generation large SUV is a noticeable step up in comfort and refinement over its predecessor.

It is also significantly more efficient. At the end of its life, the previous Discovery was available with only one engine, a 3.0-litre SDV6 with CO2 emissions of 213g/km and an official combined fuel economy of 35.3mpg.

The new model is available with Jaguar Land Rover’s 2.0-litre SD4 diesel Ingenium engine for the first time, and the 240PS (500Nm of torque) unit provides efficiency figures of 171g/km and 43.5mpg.

The Discovery fares much worse than its Audi Q7 rival under the new Vehicle Excise Duty (VED) rules. Due to its emissions, it incurs a first year rate of £800 compared to the Q7’s £200. Both are £140 a year after that.

For those potential Discovery customers who want more power, a 3.0 TD6 engine with 258PS and 600Nm of torque is also available, as is a supercharged petrol 3.0 Si6, which produces 240PS and 450Nm.

For most drivers, the 2.0 SD4 model will provide more than ample performance. It delivers its power smoothly through an eight-speed automatic gearbox, the only transmission available across the range.

Performance is aided by the increased use of aluminium in the structure, which has helped reduce the new Discovery’s weight by up to 480kg compared to its predecessor.

On the road there is no disguising the fact that the Discovery is a big, heavy car. Its ride is set up to cosset rather than entertain with sporty handling and this means it doesn’t feel particularly agile. However, it is extremely comfortable and its high levels of refinement match the character of its luxurious cabin perfectly. There is a real sense of occasion when you get behind the wheel.

The driving position is commanding, while its three rows of seats provide plenty of room for seven people:  Discovery continues with its predecessor’s ‘stadium seating’ arrangement, which sees each row positioned higher than the one in front, improving passenger visibility.

Headroom for passengers in the third row is also optimised by the latest Discovery retaining the stepped roofline of its predecessors.

Boot space with the third row of seats folded down is 1,137 litres, rising to 2,406 litres with the second row folded as well.

The Discovery is also available with a number of options. These include a head-up display (£1,035), adaptive cruise control with queue assist (£1,475), and Intelligent Seat Fold (£415) which folds the second and third rows of fleets flat via a smartphone app.

Despite its move upmarket – a further sign of this is that no commercial version is planned – the Discovery continues to be outstandingly capable off-road.

Its air suspension can increase the ride height by 40mm at speeds up to 50mph or 75mm at below 31mph, to create 283mm of ground clearance and a 900mm wading depth, while a range of technologies provide it with excellent traction in difficult conditions and terrain.

This means the Discovery is a hugely impressive package. Those who want the traditional off-road abilities of a Land Rover will not be disappointed, while its blend of practicality, comfort, quality and technology gives it plenty of appeal to luxury large SUV drivers too.