Breakdowns which could be attributed to potholes increased by 11% in the last quarter of 2017 compared to the same period in 2016, according to the RAC’s Pothole Index.

Data shows that 2,830 RAC individual member breakdowns were logged between October and December 2017 where vehicles had broken down due to damaged shock absorbers, broken suspension springs or distorted wheels, likely due to poor quality road surfaces.

The number of these potential pothole breakdowns was up from 2,547 in the same quarter of 2016. It suggests that the surface quality of some UK roads has already been impacted by the higher rainfall and increased days of frost during the last quarter of 2017 compared with the same period in 2016.

The RAC believes the condition of many roads is therefore hanging in the balance with the potential for a further sharp rise in the number of potholes by the spring if the weather is particularly wet or cold over the next few months.

RAC chief engineer David Bizley said: “For the majority of drivers, these latest statistics are likely to be met with concern. After several years in which the surface quality of our roads appeared to be improving, the latest analysis of RAC breakdown data suggests that for the third successive quarter we have gone backwards.

“The higher rainfall in the last quarter compared to 2016 and the snowy and icy conditions that much of the country experienced into December are likely to be significant factors.”

Worryingly, the total number of RAC ‘pothole’ faults in all four quarters of 2017 exceeded the equivalent quarters 12 months earlier in 2016. And October to December of last year also saw the highest ever proportion of fourth quarter RAC breakdowns where poor quality road surfaces were likely be a factor, with 1.2% of all breakdowns associated with such faults – up from 0.8% in 2015 and 1% in 2016. Previously, the highest proportion of fourth quarter RAC ‘pothole’ breakdowns stood at 1.1% in 2013.

The RAC’s Pothole Index, a 12-month rolling measure of the share of pothole fault breakdowns compared to 2006, corrected for seasonal weather effects and improving longer term vehicle reliability, has risen again for the third successive quarter.

Using a base of 1.00 established in 2006, the Index for the fourth quarter of 2017 stood at 2.59 – with the higher the figure, the greater the likelihood of an RAC member suffering a breakdown caused by a pothole and so potentially the worse the standard of some roads.

The Index is now at its highest since the second quarter of 2016 suggesting that the condition of our roads has been declining steadily over the last 18 months – although at 2.59 it is thankfully still well below its peak of 3.5 reached in Q2 2010.

Bizley said: “We were obviously grateful that the Chancellor announced additional funds for fixing potholes in the autumn Budget but if we get more ice and snow or further heavy rainfall than normal in the next couple of months, there is a risk of further deterioration of road surfaces – and even more potholes appearing in the areas worst affected by the weather.

“Put simply, potholes are a menace for drivers and indeed for all road users. They represent a serious road safety risk and anyone who has driven into one will know it can be a frightening experience, not to say a potentially costly one – distorted wheels, broken springs and shock absorbers can be very expensive problems to put right. And for those on two wheels it can be genuinely life-threatening.”

The RAC wants to see local authorities given the certainty of ring-fenced, long-term funding from Government sufficient to enable them to bring all of the UK’s roads up to a standard that is fit-for purpose.

“Drivers contribute around £40bn of motoring based taxation a year and many will feel that they are having to endure roads that are substandard and therefore getting poor value for money,” said Bizley.

Matt Dyer, managing director of LeasePlan UK, told Fleet News that the road network is vital for helping businesses power the country through challenging economic circumstances. However, he said: "The current approach is like putting a plaster over an open wound – it’s not sustainable or fixing the actual issue – that fact our transport infrastructure is in desperate need of an overhaul.

“The vehicle rental and leasing industry contributes around £25 billion a year to the UK economy and in 2017, the leasing industry alone accounted for more than half of the number of new cars registered on the road. If we are to encourage an uptake in electric and driverless vehicles, we need the roads to help keep us and our vehicles safe too. This means changing our approach to problems such as potholes which need banishing once and for all.” 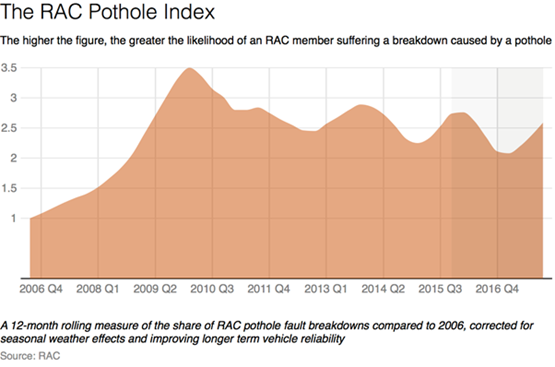 Potholes on UK roads could cause windscreen damage

A report from Asphalt Industry Alliance (AIA) has warned that potholes on UK roads could cause windscreen damage.

Van drivers have listed potholes as a top priority in a new manifesto released by Mercedes-Benz Vans.