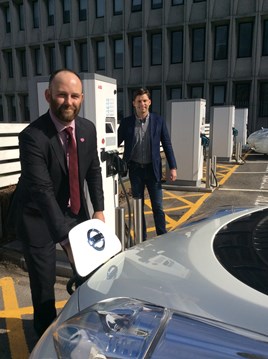 Under the Green Wheels initiative, rather than council staff using their own vehicles and claiming back business mileage costs, a pool of Co-wheels car club vehicles has been made available.

The vehicles have also been available to hire by members of the public in the evenings, with plans to expand the scheme through the provision of EV vehicles across Manchester available 24 hours a day.

Councillor John Ferguson, lead member for workforce and industrial relations at Salford City Council, said: “When we launched the plan, staff were travelling 1.7 million miles a year on business – that’s the equivalent of 40 times round the earth every year.

“Clearly that was not sustainable or good for the planet.

“We linked up with the Co-wheels car club which provides and maintains a fleet of 39 eco-friendly cars at 13 sites across the city, including eight electric vehicles.

"These are used by council staff during the day for business travel and are then available for residents to hire during evenings and weekends.

“We have also trialled eight pool bikes for staff who want to cycle to meetings which may become permanent and staff can get pre-paid bus tickets for business travel.

Part of the plan also included supporting staff to cycle to work, with the introduction of improved shower and drying facilities, a salary sacrifice scheme to enable staff to buy bikes and encouraging the use of public transport and car sharing.

“In this instance Salford undoubtedly recognises where the future of motoring lies and is encouraging staff to get on board at an early stage.

"By operating an EV pool fleet, council staff members will become familiar with the concept as it increasingly considered a typical form of transport.”

NHS Fife aims to save £100,000 a year through new Enterprise Car Club

NHS Fife is aiming to save more than £100,000 a year after teaming up with rental firm Enterprise Car Club to launch a car club.

Financial services provider MotoNovo Finance is replacing its pool car with Enterprise Car Club vehicles for staff use after its move to new offices with limited on-site parking.