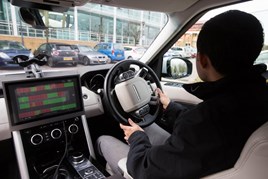 It has found that the cars could communicate with each other to notify drivers of available parking spaces – without the need for any additional parking bay sensors.

Upon entering the car park, the cars get an updated heat map showing availability, while real-time updates from other connected cars show spaces filling and becoming vacant.

Jaguar Land Rover has also demonstrated its own technology by showing an autonomous car successfully driving itself to an available car park, bay before parking itself.

Arup UK’s Autodrive project director Tim Armitage said: “Connected and autonomous vehicles are expected to bring a large number of social benefits, from improved road safety to an easing of traffic congestion due in part by a reduction in accidents.

"The possible benefits in terms of parking should also not be overlooked.

“In the future connected features will alert drivers to empty car park spaces and autonomous vehicles will be able to drive straight to them.

"Valet parking systems will enable autonomous vehicles to drop passengers at convenient points, after which the vehicle will leave by itself to undertake a further journey, or park out-of-town.

“As well as making parking less of a hassle for individuals, these new ways of parking and drop-off will allow cities to radically redefine their use of space in the future – with far less land potentially needed for parking spaces in city centres.”

The first involved an Emergency Vehicle Warning (EVW) system, which alerts drivers when an emergency vehicle is approaching and also indicates which direction it is coming from.

The UK Autodrive project is due to trial a fleet of up to 40 low-speed self-driving ‘pod’ vehicles in pedestrianised areas of Milton Keynes over the summer.

List of connected car features being trialled within the UK Autodrive programme:

All of the cars being used in the UK Autodrive project have been tested before being introduced onto public roads.

Robust safety measures have been developed and refined as integral parts of the programme.

In addition, there will be a trained operator at the wheel – ready to take control of the vehicle if necessary.