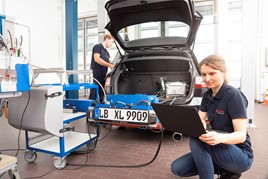 A recent technology breakthrough by Bosch, which the company claims can radically reduce nitrogen oxide emissions from diesel engines, could slow down the move away from diesel vehicles, says Fitch Ratings.

Bosch says its technology has the potential to reduce diesel vehicles' nitrogen oxide emissions to a tenth of the regulatory limits scheduled to come into force by 2020.

Fitch Ratings said if the proposed technology provides the silver bullet Bosch hopes, it could allow manufacturers to rebalance their planned portfolios to get more of the fleet-wide efficiencies they need to achieve from diesel efficiencies rather than electrification.

Fitch Ratings said its report 'Batteries Update: Oil Demand Could Peak by 2030' highlighted the unpopularity of diesel as one of the things that had encouraged manufacturers to step up their plans for EV adoption.

It added: "These plans are now tracking the hypothetical 'extreme case' scenario we first presented in 2016, under which all cars sold are electric by 2035, and which could see oil demand peak by 2030.

"There remain strong drivers of EV demand, including drive quality, continued improvements in battery costs and performance, green credentials, and a clear policy bias in some jurisdictions in their favour.

"In the short term, we can add the increased oil price, which has recently risen to USD75 (Brent), well above our long term projection of USD57.50.

"However, major constraints to the adoption of full EV remain, including the extra cost, the lack of charging infrastructure, and the time needed to recharge the battery, leading to a high degree of uncertainty regarding the pace and extent of EV adoption."

Bosch claims it has achieved a “breakthrough” in diesel technology by dramtically cutting NOx emissions.