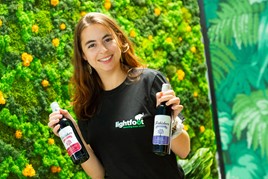 As part of this partnership, Frobishers will sponsor its own Lightfoot league in which elite drivers (those who achieve Lightfoot’s gold standard for efficient driving) can compete for prizes.

By following Lightfoot’s in car audio and visual guidance, elite drivers can cut their fuel bills and carbon footprint, while being rewarded for smoother driving through a host of rewards and discounts.

Thanks to Frobishers, they will soon have the chance to win one of three crates of cordials and juices every week by entering the Frobishers Lightfoot league.

Mark Roberts, Lightfoot CEO, said: “Supporting local businesses is something Lightfoot has always been committed to, but to partner with a company that matches our values and trajectory so closely feels that extra bit special.”

Funding from Innovate UK will support research and development as company looks to reach and inspire a new generation of better drivers.

Lightfoot has announced the appointment of Kevin Hennelly as its new head of sales, following a £1 million innovation loan from Innovate UK.