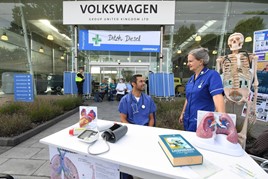 Representatives from the organisation, which is demanding the manufacturer stops producing diesel cars, arrived at 7am and set up a ‘diesel pollution clinic’ outside the building’s entrance.

Greenpeace said this offered advice and health checks to staff and members of the public.

Poor air quality is estimated to contribute to more than 40,000 premature deaths across the country each year.

Research has shown that the phasing out of petrol and diesel vehicles would lead to a 30% reduction in pollution in 2030. 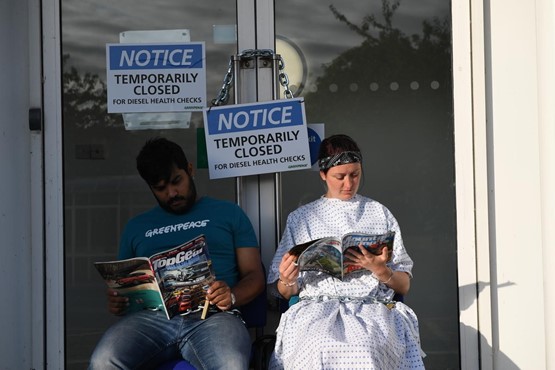 “Volkswagen sold us a lie about diesel being clean. Its diesel addiction is seriously harming people’s health.

“Volkswagen won’t meet with us and won’t listen. So today we’ve brought the truth about diesel to its doorstep.

“Volkswagen must face up to its responsibility for deadly air pollution and commit to end diesel production now.”

A Greenpeace poll has found that more than two-thirds of people believe car companies should be held to account for toxic diesel pollution and be made to contribute to a Clean Air Fund.

A statement released by Volkswagen UK said: "Volkswagen is aware of a protest at its Blakelands premises this morning. The safety of our employees is our principal concern and so the matter is now being handled by the police.

"Roadmap E brings a 20 billion Euro investment to electric vehicle technology with the goal of 25% of Volkswagen Group vehicle production comprising electrified vehicles by 2025 and 50% by 2030."