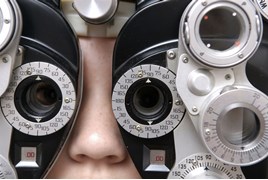 Motorists who fail an eyesight test after being stopped by police will have their licences revoked on the spot under a new crackdown.

During this month, three police forces – Thames Valley, Hampshire and the West Midlands – will require all drivers stopped to read a number plate from 20 metres.

If they are unable to, then the police officers in those areas will implement their powers to request an urgent revocation of a licence through the DVLA if they believe the safety of other road users will be at risk if that motorist remains on the road.

Thousands of drivers are believed to get behind the wheel of a vehicle each day and as well as removing dangerous drivers from the roads, the scheme will allow police to collect data on the extent of the problem.

Sgt Rob Heard, from the Hampshire force, said: “Not being able to see a hazard or react to a situation quickly enough can have catastrophic consequences.”

He added that eyesight checks would be carried out “at every opportunity”.

Under current rules, a learner driver must be able to read a number plate from 20 metres under the practical part of their test.

However, once someone has obtained a licence, it is up to them to assess their own vision and inform the DVLA if they have an eyesight problem.

Joshua Harris, campaigns director for road safety charity Brake, said: “It is frankly madness that there is no mandatory requirement on drivers to have an eye test throughout the course on their driving life.

“Only by introducing rigorous and professional eye tests can we fully tackle the problem of unsafe drivers.”

Neil Greig, director of policy and research, said: “Law abiding drivers have nothing to fear from this – but we believe that extending the range of checks that the police could and should be doing will help remove many more unsafe drivers from our roads.

“They should be, as a matter of course, examining the following five key items: driving licence, MOT, vehicle insurance, drink/drugs and now eyesight.

“Adding a vision test to the standard list of roadside checks will be a sharp warning to those drivers who chose not to wear their glasses, or not get their eyesight checked, that the enforcement is now out there to back up the regulations.

“Our message is simple. Don’t risk it.”