Within an overall market decrease of 87,000 on the new car market during the same period last year, registrations for fleets and businesses dropped by -22.4% and -6.3%, respectively.

Hybrid and plug-in electrics showed an increase of 3.9% while registrations of both diesel and petrol-fuelled vehicles fell. 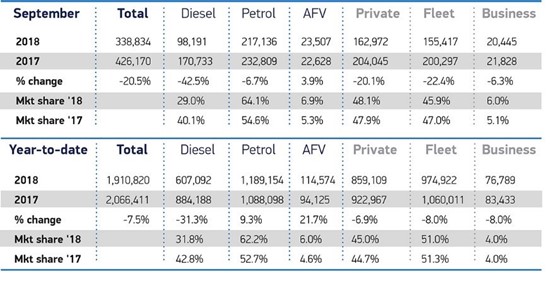 Lex Autolease's head of consultancy Ashley Barnett said the decline was not unexpected and hopes that this month's Budget will provide long-term clarity for company car drivers.

He said: "From a company car driver’s perspective, the lack of long-term clarity around tax means there’s no way of knowing a vehicle’s cost for the contract duration.

"Drivers of low-emission vehicles can be fairly confident that the government will favour them in its longer-term tax planning, but even they are keen for some assurance.

“It’s positive to see that demand for alternatively-fuelled vehicles is increasing, but important to reiterate that all fuel technologies have a role to play.

"If we are to meet the government’s ambitious climate change targets, it’s essential that drivers select the right vehicle for the task at hand, and that those who are well-suited to a zero or low-emission vehicle consider making the move.

“We’ve developed a fuel decision tree to help customers identify the most suitable fuel technology, based on their individual circumstances. For high mileage, high-speed motorway drivers it may be that diesel is still the most practical option.

“We are hopeful that this month’s Budget will provide answers to help all drivers plan for the future.  The new vehicle market plays a vital role in driving replacements across the wider UK fleet, and feeds the second-hand market with newer, cleaner vehicles.

"As long as replacements continue, older, more polluting vehicles should drop out of the bottom of the market altogether.”

SMMT chief executive Mike Hawes said: “With the industry given barely a year to reapprove the entire European model line-up, it’s no surprise that we’ve seen bottlenecks and a squeeze on supply.

“These are exceptional circumstances with similar declines seen in other major European markets. The good news is that, as backlogs ease, consumers and businesses can look forward to a raft of exciting high-tech cars and a market keen to recover lost momentum.”

Declines were seen across almost every vehicle segment, the SMMT said, with MPVs and Specialist Sports cars showing the biggest falls, down -54.8 and -50.9%, while luxury saloons were the only segment to register growth, up +3.5%.

The increasing range of new models due to be certified for sale is expected to ease the backlog.

KPMG's UK head of automotive Justin Benson said: “Cars are a big ticket purchase, so any confusion around what type of car to buy will impede growth in sales, and the downbeat messaging from automakers regarding Brexit will inevitably have made consumers think twice before driving off the forecourt.

"Meanwhile, the new emission testing regime may have proved a bottleneck this month, but in the long run it will really help consumers decide which car is best for them and the environment.”

However, manufacturers believe there is a restructure of the sector taking place as the profitability of UK car sales drops, which could ripple into short-term rental and fleet businesses, as manufacturers shift focus to other more profitable markets.

RSM's head of automotive Alison Ashley said: "Not even consumer demand to secure the new plate could boost activity, as certain manufacturers have limited supply having slowed production ahead of WLTP to mitigate scrappage of non-compliant stock.

"As supply is down, September hasn’t pushed the industry ahead of the forecasts and consumers will now have to wait much longer for new car deliveries until supply levels return to normal - adding further pressure to the UK car industry."

“The declines across the main European markets demonstrate the challenges that WLTP has posed to manufacturers not only in the UK.

"As today’s figures show, certain brands have fared worse than others due to the complexity and scale of the new testing regime.

“Consumer footfall has remained fairly robust although a proportion of motorists feel unsure about which car to buy due to the lack of clarity surrounding a number of key policy areas.

"We encourage consumers to talk to their local franchised dealership to obtain a better understanding of the current market offering.

“We expect the market to remain steadier through the remainder of the year as stock supply improves. The used market is likely to continue to perform well." 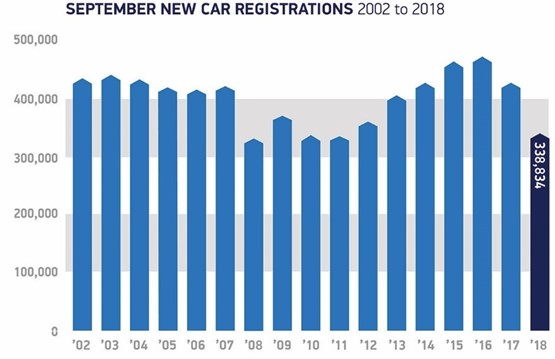 There were 52,656 cars registered to fleet and business, with 41,438 private registrations, equating to a 56% market share, says SMMT.

The European Parliament wants to cut average CO2 emissions from new cars and vans by 40% by 2030, with 35% of registrations to be ultra-low emission vehicles by that time.