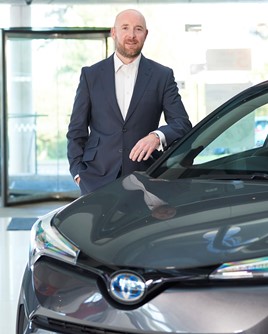 Both appointments come into effect on January 1, 2019.

Ferma has been with Toyota GB for more than 20 years.

He joined the company as a customer relations advisor before progressing through roles in sales administration, sales field management, network and channel development and customer retention.

Most recently he was national fleet sales manager.

Ferma said: “Our position in the fleet market has never been better.

“I am very grateful to Neil for the dedicated work he has put in and the great support he has given me over the years.

“With my move up to head fleet operations we are also maintaining continuity in the good relationship we’ve established with our customers.”

Broad has also spent two decades with Toyota GB and has led the fleet department as general manager since 2012.

In his new role he will join the Toyota marketing communications team to help the focus on brand development.

Green fleet manufacturer of the year: Market ‘coming round’ to Toyota’s way of green thinking

When Prius was introduced 21 years back people thought the company had lost its marbles. It doesn’t look so crazy now. By Sarah Tooze

Toyota is reviving the most famous nameplate in automotive history.

Toyota has unveiled the Corolla Touring Sports at the 2018 Paris Motor Show, alongside the new Corolla hatchback that was revealed earlier this year.