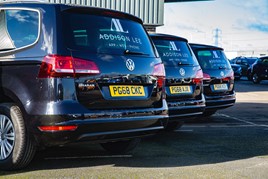 The Euro 6 diesel Sharan SE 2.0 TDI BlueMotion 150PS DSG models will be compliant with Transport for London’s ULEZ, which comes into force on April 8.

The order is the single biggest purchase in the UK to date for Sharan, and they will be delivered over the next three months.

Lisa Burger, chief operating officer for Addison Lee Group, said: “We share Transport for London’s ambition to clean up London’s air, and this multi-million investment in new vehicles will make our entire fleet compliant with TfL’s low emission standards and start the process of moving towards a zero-emissions capable fleet.”

Addison Lee said the move into the Sharan models is the start of a journey towards a zero-emissions capable fleet by 2022, as the group assesses technology choices across other parts of its fleet – including electrification – with pilots expected during this year.

The company will consider both plug-in hybrid vehicles (PHEV) and battery electric vehicles (BEV) from a range of manufacturers.

Burger added: “We are keen to move quickly to an electric fleet for the benefit of London’s environment, but are limited by London’s charging network, which as the report by Dr Rebecca Driver demonstrated, cannot support a shift to electric by the capital’s private hire and taxi industry.”

Driver’s The Provision of Rapid Charging Points in London report, published in 2017, found that if only 25% of the 108,700 taxis and private hire vehicles operating in London were to convert to ULEVs, then more than 2,135 rapid chargers would be required just to meet the need of the sector.

If all 108,700 converted, then 8,540 would be required, without considering the needs of other types of fleet operator or private users.

In contrast, when the report was written there were 75 rapid recharging points available in London, with the plan to increase this to 150 by the end of 2018 and 300 by 2020.

Michael O’Shea, head of fleet for Volkswagen UK, said: “We are very pleased to be working with such a prominent name as Addison Lee Group.”