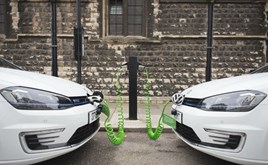 The company has been operating in the UK for 15 years, first as start-up Streetcar and later as Zipcar UK.

It now has 2,600 vehicles in the UK, while Zipcar Flex is now available in 10 London boroughs with more in the pipeline. Lewisham, for example, experienced 44% year-on-year growth  and Wandsworth 38%.

Zipcar UK’s general manager Jonathan Hampson said: “London is an increasingly expensive city to live in, and people just can’t afford to own a car when they don’t need it every day, so it makes more sense to share, especially with the hefty new ULEZ charges about to come into force.

“Pollution is also now considered to be at crisis level by 90% of Londoners, which is prompting them to seek out greener ways to get around the city.

"We know from research that car sharers are twice as likely to use public transport and/or bikes than use a car, meaning our service is helping tackle issues like car dependency head-on."

Car-sharing network Zipcar has launched its fleet of 325 Volkswagen e-Golf electric cars in London - and called for more action to improve the capital's air quality.

Nearly half (47%) of Londoners aged 18 to 34 have tried car sharing at least once, according to research from Zipcar UK.

Volkswagen’s partnership with car sharing club Zipcar UK has delivered over 250,000 miles zero-emission driving in London, since it joined the fleet in July 2018.