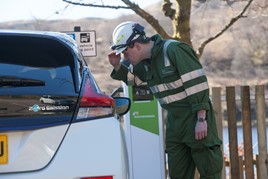 ScottishPower is to launch a public electric vehicle charging business as part of a £2 billion clean energy investment.

Based within its retail division, the new business will install fast chargers across the UK at strategic commercial locations from winter this year.

The £2bn investment is the company’s biggest investment in the country in a single year and was announced following the sale of this thermal generation business and transition to 100% renewable energy in 2018.

Keith Anderson, CEO of ScottishPower, said: “Our first investment plan since leaving coal and gas behind is a historic milestone for ScottishPower and is a vote of confidence in the UK’s commitment to decarbonising the economy.

“In a time of uncertainty the UK needs to deliver its Industrial and Energy strategy and that’s what we’re providing with our biggest ever investment in a single year.

"That is what ScottishPower is focused on delivering and as long as Government climate change commitments stay firm, with sensible policies to support them, this investment will continue.

“Now that we have sold our gas power stations our growth plans are about cleaner and smarter power that will help the UK to decarbonise faster and we have set out the part we will play in the transition to electrify the economy where it matters most now – in transport and in heating.”

The large-scale battery project will be the first of a series of storage schemes, mainly located at windfarms and at strategic points on the network.

ScottishPower believes the combination of renewable energy and flexible storage are the most cost effective low carbon solution for consumers.

Investments will also target the digitalisation of the grid including ground-breaking artificial intelligence systems that will control and balance the network in areas with high penetration of low carbon technologies enabling the transition to widespread use of electric vehicles.

ScottishPower to use EVs wherever possible

After trials on electric models, ScottishPower decides it will no longer replace its vans and cars on a like-for-like basis. Andrew Ryan outlines the thinking

ScottishPower is launching a new tariff for electric vehicle owners that provides discounted charging during off peak hours.