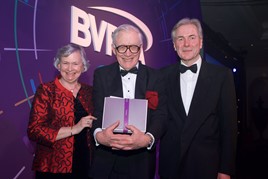 The British Vehicle Rental and Leasing Association (BVRLA) recognised the outstanding contribution of Brian Back to the industry at its annual dinner in London, last week.

Back was presented the first Freddie Aldous Lifetime Achievement Award in honour of the BVRLA’s Honorary Life President, who passed away in 2017.

He has held leadership positions in some of the industry’s most successful companies, chaired numerous BVRLA committees and spent more than 20 years on the BVRLA Board. Back has also spent over a decade on the board of industry charity BEN.

BVRLA chief executive Gerry Keaney said: “Freddie Aldous made an outstanding contribution to the industry and the BVRLA. We are remembering his legacy by dedicating an award in his name to those that have followed in his footsteps and provided great service to our association and the wider industry.

“I am delighted that the inaugural lifetime achievement award was presented to Brian Back, in honour of the support and leadership Brian has shown within the BVRLA over the years.

“It is fitting that Freddie was instrumental in helping to recruit Brian into an active role with the BVRLA. Brian has provided wise counsel to BVRLA chief executives at some of the post pivotal moments in the association’s 50-year history.”

Other outstanding performers in the vehicle rental and leasing industry were winners of the BVRLA Industry Achievement Awards. Stephen Best of Arnold Clark Car and Van Rental and Jennifer Wilson of Inchcape Fleet Solutions were the top performers in BVRLA accreditation programmes during 2018.

The final accolades on the night were the Industry Hero Awards, rewarding the unsung stars of the sector who had been nominated by their managers.

For working tirelessly in customer facing roles and behind the scenes and for demonstrating a commitment to excellence. The winners were Ashlee Lanchbery of Alphabet (GB) and Mark Gallagher of Grosvenor Contracts Leasing.

The annual gala dinner event attracted over 850 people from the vehicle rental and leasing sector and during his address to the room, via video link from the USA, BVRLA chairman Matt Dyer referred to the unprecedented pace of change the sector is facing.

“As an industry, we have taken new challenges such as air quality, congestion, road safety and urban mobility and used our expertise, insight and financial acumen to come up with solutions and services,” he said.

“During 2018, the BVRLA engaged with a more diverse membership than ever before and spoke to a record number of policymakers to raise the profile of the industry, engaging with officials in town halls, in Westminster and at Number 10.”

BVRLA warns motorists to be wary of online leasing scams

The latest BVRLA leasing broker statistics shows a levelling out of the market during 2018 as the overall rate of growth remained at 10%, commensurate with 2017 figures.

The report says a fairer and more sophisticated tax system could be based on distance travelled, time of journey, location or air pollution.