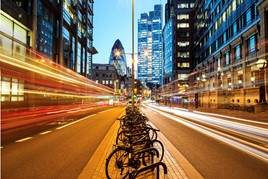 The proportion of compliant vehicles entering London’s ULEZ, which goes live from today (Monday, April 8), has increased by more than a third, since the T-charge was introduced in February 2017.

There were 55,457 compliant vehicles that drove into the zone, on average, each day in March, while 35,578 vehicles failed to meet the latest emissions standards. If those numbers are repeated now the ULEZ charge is live, Transport for London (TfL) would receive some £500,000 each day, or £175 million-plus per year in ULEZ charges.

TfL figures also show that there has been an 11% decrease in the total number of vehicles driving within the zone over the same period each day (some 11,000 vehicles).

The central London ULEZ will operate in the same area as the current Congestion Charge zone 24 hours a day, seven days a week, 365 days a year. It replaces the T-Charge and operates alongside the Congestion Charge.

Petrol vehicles that meet the standard have been widely available since 2006.

There will be two ULEZ charge levels: £12.50 a day for cars, vans and motorbikes and £100 a day for lorries, buses and coaches.

In a survey of 2,000 across the UK, Nissan found that only one in three were aware of the ULEZ going live from today, yet almost half of all respondents support the daily charge’s introduction.

Confusion over whether one must pay the charge or not was high, with 75% of those surveyed having no idea what the Euro emission standard rating is for their current vehicle – the criteria that dictates their eligibility to pay the ULEZ charge or be exempt.

The British Vehicle Rental and Leasing Association (BVRLA) meanwhile, is urging businesses to consider their road transport options as London’s ULEZ is implemented.

“Businesses across London are upgrading their fleets to comply with the new ULEZ, but it is clear that many smaller firms are still unaware of the zone or are struggling to afford the switch to expensive new low emission vans and trucks,” said BVRLA chief executive, Gerry Keaney.

“It is vital that these companies assess their potential ULEZ costs and work out if they are eligible for any of the discounts, exemptions or scrappage schemes that are available.

“In many cases, they will be able to manage their costs better by leasing or hiring a compliant car, van or truck. BVRLA members have more than 100 branches and depots within the Greater London area, as well as thousands of car club cars and vans strategically located on streets across the capital.”

The Climate Group says that today’s introduction of the world’s first ULEZ will rapidly speed up the switch to electric vehicles.

Helen Clarkson, CEO of The Climate Group, said: “There has never been a better time for businesses to make the switch to electric vehicles.

“With countries pledging to end sales of the internal combustion engine and cities bringing in low or zero emission zones, the business case for EVs is getting ever stronger.

“Through our global initiative on electric transport EV100, more and more companies are making the switch worldwide, helping to tackle climate change and air pollution while avoiding new charges in city centres.

“London is demonstrating great leadership by introducing the world’s first Ultra Low Emission Zone. This is exactly the kind of bold policy measure we need to tackle inner city air pollution and drive down carbon emissions. Congratulations to the Mayor – we hope other major cities are inspired to follow suit.”

To date, The Climate Group has secured the electrification of more than 2 million vehicles by 2030, saving over 6.6 million metric tons CO2e – equivalent to the carbon footprint of 1.9 million UK households.

The initiative now brings together 35 leading companies with a combined revenue of over half a trillion US dollars, including Ingka Group (formerly IKEA Group), Unilever and BT Group.

Over 95% of EV100 members surveyed cite reducing greenhouse gas emissions as a ‘very significant’ or ‘significant’ driver for switching, and 80% cite the need to tackle air pollution. A third identify financial savings as an incentive.

Ingka Group (formerly IKEA Group) is future-proofing its operations by switching to EVs.

Due to future limits on vehicle emissions in Amsterdam’s city centre, from 2025 it would lose direct access through deliveries to more than 390,000 households and US$30.2 million turnover per year. The retailer has committed to 100% zero-emission last-mile deliveries in five major cities by 2020 – and recently reached this goal in Shanghai one year early.

Poppy Welch, head of Go Ultra Low, the joint Government and industry campaign to promote the uptake of electric vehicles, concluded: “For businesses regularly driving in London, the introduction of the Ultra Low Emission Zone means there has never been a better time to consider incorporating electric vehicles into fleets.

"Offering exemptions from both the Ultra Low Emission and Congestion Charge zones, cheaper running, maintenance and tax costs, as well as a government grant towards the purchase price of qualifying zero emission vehicles, they can offer considerable whole life cost savings.

"With a number of other cities, including Leeds and Birmingham, set to introduce clean air zones over the coming years, now could be the perfect time to invest in a lower emission, and lower cost, electric vehicle fleet.”

A summary of vehicle compliance data from TfL

* The figures are based on average unique vehicles detected during Congestion Charge hours per charging day.
Related content by tag :

Europcar Mobility Group UK has announced a ULEZ Clinic on April 8, as research revealed a quarter of businesses still hadn’t made plans.

Why Pimlico Plumbers' Charlie Mullins is against London's ULEZ

By Charlie Mullins, CEO and founder of Pimlico Plumbers