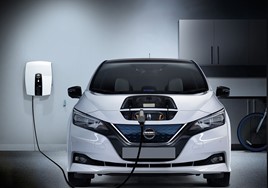 Company car parks and council pool fleets are among the scenarios which are best suited to vehicle to grid (V2G) electric vehicle charging, Cenex has found.

The centre of excellence for low carbon and fuel cell technologies found that bidirectional V2G charging, which sees vehicles provide energy from their batteries to the grid when plugged in, delivers greater value and revenues than unidirectional smart charging.

The report says the potential value which can be earned by V2G is highly dependent on the customer, with certain types seeing much greater value than others.

However, the average V2G chargepoint could generate £186 of additional annual value compared to unmanaged charging, through a combination of energy bill savings and additional revenue from grid services.

When compared to unmanaged charging, smart charging captures between 40% to 80% of the value of V2G. If V2G is unable to access grid services, then smart charging gives you the upper range of that value.

These revenues increase the longer vehicles spend plugged in, which means that V2G charge points where EVs are connected for 75% or more of the time could generate £436 per annum of savings, compared to smart charging.

Robert Evans, CEO of Cenex, said: “While there has been an increasing focus on V2G charging, until now there has been a lack of clear data on its costs and opportunities, holding back the ability of organisations to build effective business cases.

“This report is the first step to bridging this information gap, and it shows multiple use cases where V2G delivers additional revenues and value above smart charging, especially around grid services.

“By making this information available Cenex aims to support the increased uptake of low emission vehicles and thus accelerate the move to a zero-carbon future.”

However, there is significant risk to grid service revenue for V2G, with at least half of the revenue at risk from falling FFR prices.

The research is based on Cenex’s work within the Innovate UK funded projects V2G-Britain, Sciurus and EV-elocity.

This information has been used to model 34 domestic and commercial customer archetypes, based on charging behaviour of particular groups.

Cenex found six archetypes that were best suited to V2G and which offer large scale opportunities in the UK market:

The Understanding the True Value of V2G report can be downloaded from https://www.cenex.co.uk/wp-content/uploads/2019/05/True-Value-of-V2G-Report.pdf

OVO has successfully installed its first vehicle-to-grid charger in a customer’s home, after the charge point was unveiled at the Energy Technology Product Showcase earlier this year.

Vehicle to grid technology has the potential to earn electric vehicle operators money, but it is not without some risks.