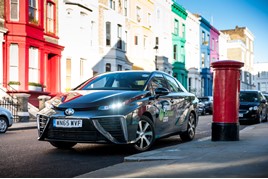 Green Tomato Cars has achieved a milestone of one million zero-emission miles in its fleet of hydrogen fuel cell Toyota Mirai cars.

Each Mirai has saved more than four times its own weight in CO2, equivalent to 7.6 tonnes per car, over this distance.

The private hire company took on 25 Mirai after starting a trial with two cars in 2015. Building on this success, Green Tomato Cars has added a further 25 Mirai to its fleet this month, giving it the largest zero-emission passenger fleet in the UK.

The Mirai is the flagship of the company’s Zero Emission Executive service, serving 2,000 corporate clients. Green Tomato Cars was the first company of its kind in Europe to take on hydrogen fuel cell cars and has carried 80,000 passengers in Toyota’s fuel cell EV.

Each car drives an average of 120 miles per day, with average fare-paying journeys of 8-10 miles.

Jonny Goldstone, founder and CEO of Green Tomato Cars, said: "We’ve been really impressed by the performance of our Mirai fleet and are very proud to have clocked up the magic one million zero-emission miles in these unique cars.

“Our passengers love them because it means they can travel as responsibly as possible, and so do our drivers.

“Running costs are comparable with a Prius and re-fuelling takes the same time as a conventional petrol car. We’re rolling out the next 25 Mirai onto our fleet right now and hopefully there will be still more to come."

Toyota’s fuel cell EV works by converting hydrogen to electricity to run its electric motors. The car is filled up at a hydrogen pump in the same way as a petrol or diesel car, with no charging needed. The only thing which comes out of the exhaust is pure water.

There are currently 137 Toyota Mirai on the road in the UK and combined they will soon break the two million mile mark.

The total of hydrogen fuelling stations in the UK today is 11, where hydrogen is produced by electrolysis from water, on site. ITM Power, the largest operator of these, will be opening a new station at Gatwick shortly.

The Mirai, which means “Future” in Japanese, has proved particularly attractive to business leaders wanting to do their part in starting an energy revolution to protect the environment, says Toyota.

In addition to Green Tomato Cars, the Metropolitan Police has 21 cars which have covered 260,864 miles and in Aberdeen there are 32 Mirais operated by users including the county and city councils and the Co-Wheels Car Club.

The new Mirai will be introduced towards the end of 2020, benefiting from a dramatic redesign, a Toyota New Global Architecture (TNGA) platform and improvements to its fuel cell system to achieve better dynamic performance and an even greater driving range.

The Mirai has been acquired with support from the Office for Low Emission Vehicles, Hydrogen Mobility Europe and the Fuel Cells and Hydrogen Joint Undertaking.