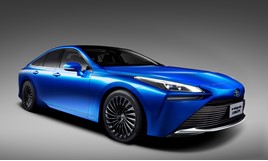 The new model will have a 30% improved range, better handling and more desirable styling.

Since 2014, the Mirai has highlighted the potential of hydrogen as a credible alternative to petrol and diesel – without the need to recharge like an electric car.

This new version vows to take things further, attracting customers with its looks, handling and performance, rather than just its powertrain.

Since launch, around 10,000 Mirai have been sold; at the same time, Toyota has actively supported the development of hydrogen fuel infrastructure in key markets worldwide.

The new Mirai is Scheduled for launch in 2020, initially in Japan, North America and Europe.

Yoshikazu Tanaka, the new Mirai’s chief engineer, said: “We have pursued the goal of making a car that customers will feel they want to drive all time, a car that has an emotional and attractive design and the kind of dynamic and responsive performance that can bring a smile to the driver’s face.

“I want customers to say ‘I chose the Mirai not just because it’s an FCEV, but because I simply wanted this car; it just happens to be an FCEV.’ We will continue our development work focusing on that feeling, and we hope that with the new Mirai we will be a leader in helping realise a hydrogen energy society.”

The new Mirai’s has sleek, taut bodywork and large, 20-inch wheels that together generate a powerful and distinctive look.

The interior has been conceived as a simple, modern space with a 12.3-inch centre display and an instrument panel that wraps around the driver. The platform and intelligent packaging allow for five seats to be provided in place of the current Mirai’s four.

The freedom to craft a more emotional and head-turning design has been one of the benefits of new Mirai being constructed on Toyota’s latest rear wheel drive modular platform, which was engineered to accommodate different powertrains – including a hydrogen fuel cell – the outset. It further gives the new Mirai a higher degree of body rigidity, which contributes to greater agility and responsiveness, and a lower centre of gravity, which makes for nimble, rewarding handling.

As well as extending the potential driving range, improvements in the performance of the fuel cell system give the new Mirai linear, smooth response when pulling away and an elegant driving feel, with unity between the driver’s throttle inputs and the car’s acceleration. Handling is light and easy on winding roads, while highway driving produces an exceptional sense of power at all speeds.

Brussels test programme follows successful simulations and trials on closed circuits and public road tests in Japan and the USA.