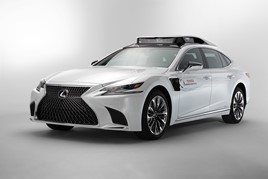 Toyota has announced that it is to start testing its automated driving (AD) technology on public roads, with a 13 month trial in the Belgian capital, Brussels.

A LIDAR-equipped (Laser Imaging Detection and Ranging) Lexus LS will make repeated journeys on public roads around a fixed route. The test programme follows successful simulations and trials on closed circuits and public road tests in Japan and America.

Gerard Killmann, Toyota Motor Europe (TME) vice president research and development, said: “Within Toyota’s global operations, TME’s Brussels R&D facility is the regional centre of excellence for computer vision – making computers ‘see and understand’ the environment around them. Toyota’s ultimate goal is zero casualties from traffic accidents, and the main goal of this pilot is to study complex and unpredictable human behaviour and its impact on automated driving system requirements.

“Responding to the complexity and diverse population of an urban environment like Brussels … is key to understanding human behaviour. After successful trials on public roads in Japan and the US, we are now adding European conditions to the technology’s understanding.”

A safety driver will – who can override the system at any point – will travel in the, alongside an operator who will supervise the entire system.

Toyota says that is has “undertaken months of thorough preparations to bring the car to the open road, validating the AD system, training the drivers, analysing the route and engaging with the authorities to gain the necessary approvals”.

The automated Lexus will also be used to collect data as part of Toyota’s involvement in the European L3Pilot project alongside 34 other partners, including a number of major car manufacturers, automotive suppliers, research institutes and authorities.

The L3Pilot is a four-year project launched in 2017 and is partly funded by the European Commission.

The future of mobility solutions, including autonomous vehicles, will be examined at the Smart Transport Conference 2019. Held on September 18, the conference is the UK's most important meeting place for senior public policy makers and influential private sector leaders. Find out more at www.smarttransport.org.uk.

Addison Lee is working to be at the forefront of connected and autonomous vehicle technologies, says its mobility innovation lead Catherine Hutt

Autonomous vehicles should be secure against cyber attack, insurers warn

Vehicles should have a sufficient level of security to guard against cyber attacks before they are allowed to be used in fully autonomous mode, the insurance industry urged.