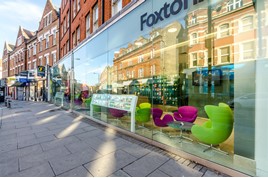 Foxtons says it will switch its fleet of 850 cars to electric vehicles (EVs) by 2030, but wants EV infrastructure to be better to help fleets make the switch sooner.

The London estate agent has also become a member of EV100, a global initiative from The Climate Group that brings together forward-looking companies, including AstraZeneca and IKEA, committed to accelerating the transition to EVs.

Nic Budden, chief executive officer, Foxtons, said: “We are delighted to be announcing our commitment to switch our fleet to electric vehicles by 2030 and becoming a member of EV100.

“By switching to electric transport, businesses can contribute to the reduction of millions of tons of greenhouse gas emissions per year, as well as curbing transport related air and noise pollution.

“However, there is a pressing need for a stronger EV infrastructure across London and the UK. Without increased charging points, greater access to ultra-fast charging and more off-road parking, businesses like ours, which often require frequent and rapid vehicle charging, will find the transition extremely challenging.

“We support the Mayor of London’s vision for an expansion of London’s EV-charging network but ask that this roll-out is accelerated so more businesses can make the switch sooner.”

Foxtons is also calling for greater transparency around future EV costs, including company car tax rates and expiry dates of existing grants, and for more support with the upfront costs incurred while upgrading an entire fleet to electric.

Sandra Roling, head of EV100 at The Climate Group, said: “We congratulate Foxtons on committing to switch its entire fleet to electric vehicles by 2030. This is a great example of how companies can accelerate the shift to cleaner transport - reducing emissions and making our cities more liveable with healthier air.

“We are sure Foxtons' leadership will inspire many other well-known high street brands to follow suit."

Seven in 10 considering an electric or hybrid vehicle

New report shows China is leading the way, with an incredible 94% of consumers considering buying an electric/hybrid vehicle.

New launches and increased availability of battery electric vehicles next year will provide a boost to achieving the Government’s Road to Zero targets.