One in three drivers (35%) say they are more dependent on using their car than 12 months ago, with public transport seen as an expensive and unreliable alternative.

The data, released as part of the latest RAC Report on Motoring, shows that most drivers would use their cars less if public transport was better.

At a time when the Government and local councils are keen for drivers to use their cars less frequently to improve air quality and cut congestion, the RAC believes the findings are a stark reminder that many people, especially those who live outside the biggest cities, remain dependent on their cars for many types of journeys.

Just 14% of drivers say they have become less dependent than a year ago, though this has also increased from 12% in 2018 indicating a small rise in those saying they are less dependent on their vehicles.

The top reasons drivers give for using their cars more are a greater need to transport family members (28%), family and friends moving further away (24%) and, perhaps most strikingly, a reduction in the provision or quality of public transport (25%) – with drivers in the North East (42%) significantly more likely to call this out as a reason for them increasingly turning to the car.

Drivers are particularly frustrated by the lack of feasible alternatives to the car for the journeys they need to make, according to the data.

More than half (57%) say they would be willing to use their cars less if the quality of public transport was better, and agreement with this statement has been high for an incredible 11 consecutive years.

Around half of drivers (53%) say they are frustrated by the lack of feasible alternative modes of transport for long journeys, with a similar proportion (52%) saying the same about short journeys. These figures both rise to 55% for drivers aged between 25 and 44.

Meanwhile, a growing number of people (36% – up from 31% in 2018) say that a lack of punctuality is a significant barrier to them using public transport as an alternative to driving, and 38% say services don’t run where they need them to.

Of those who would be willing to consider using public transport if services were better, almost a third (31%) say they would make more use of it if there was greater availability of services – a figure that rises to 40% for rural motorists, reflecting to some extent the significant cuts that were made to rail services following the Beeching Report and, more recently, to rural bus services as highlighted last year by the Parliamentary Transport Committee.

The RAC’s findings also show that motorists who live in London are more likely to use alternatives to their cars compared to drivers elsewhere in the UK.

In the capital, on average 38% of each driver’s weekly journeys are made either by public transport, walking or cycling, compared with a national average of just 24%.

For those who live in villages or other rural areas, cars typically account for an enormous 85% of all journeys, with just 15% currently represented by public transport, cycling or walking.

RAC data insight spokesman Rod Dennis said: “These findings present the stark reality for so many people in the UK – that for good or bad, in 2020 the car remains an essential means of getting about whether that is for commuting, dropping off and collecting children or going to visit family and friends.

“While the car might be the obvious choice for many people’s journeys, especially for those who have already invested a lot of money in buying or leasing one, it is also clear just how frustrated many drivers are with the lack of decent alternatives for some of their trips.

“For more than a decade now, drivers have been saying that they are willing to use their cars less if public transport was better – and this year’s figures indicate it’s the high cost and low frequency of services that are the biggest problems cited by drivers. At the same time,

“The ongoing challenge for national and local government, and combined authorities, is therefore to deliver credible alternatives to the car for specific journeys that are regularly completed by a lot of people.

“Connecting large residential areas with popular locations for work would surely be a good starting point – giving drivers the opportunity to swap sitting in daily traffic jams for a fast, frequent alternative.

“Greater investment in walking and cycling infrastructure could also go a long way to encouraging drivers to use of their cars less, especially for short journeys that make up around a quarter of all drivers’ trips.

“But it remains the case that short of cheap, reliable and integrated public transport systems operating all over the UK, it is very difficult to see things changing radically in the years ahead.

“The car remains an integral part of so many people’s lives, whether that is for carrying heavy shopping, transporting family members or going to visit friends in all the corners of the UK.”

In charts and tables: car dependency in the UK 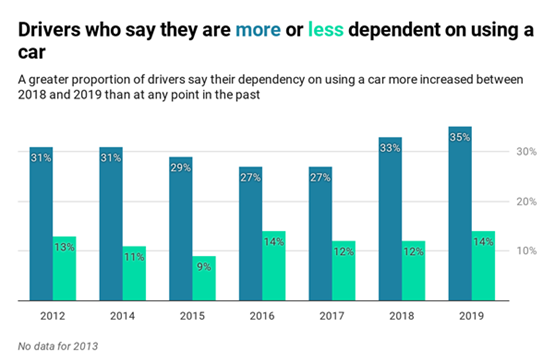 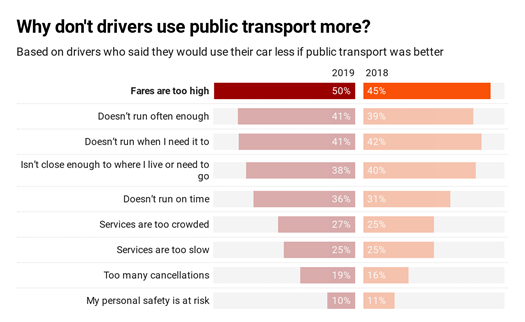 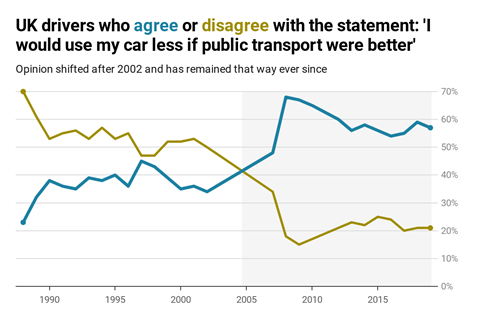 The problems with public transport: insights into bus and rail use

At the end of last year, the Campaign for Better Transport’s Future of Rail report indicated that the cost of rail fares has increased by 47% over the last 10 years, with motoring costs having gone up by 32% over the same period.

The same organisation’s Future of the Bus report also found that national and local funding for buses is now almost £400m a year lower than it was a decade ago.

The last National Travel Survey also showed that bus use is falling across much of England.

Last May meanwhile, the Parliamentary Transport Committee published a report which called for the introduction of a national bus strategy to address the paucity of services available outside of London, where bus provision is regulated by Transport for London.

The committee said that more than 3,000 bus routes had been reduced, withdrawn or altered since 2010-11.

With talk about future urban mobility focused largely on electric and autonomous vehicles, MCIA has urged industry not to overlook PLVs.

FN50 survey shines a light on attitudes to mobility and the role of the company car.