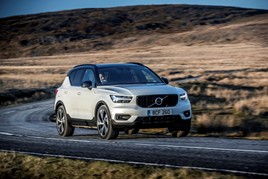 The vehicles, due for delivery in April, will be used by management and the sales team located at the company’s head office and its five strategically placed depots.

The choice of the plug-in hybrid premium compact SUV will help Thomas Hardie Commercials significantly reduce its carbon footprint, while helping the company to meet the ISO 14001 Environmental Management standard, it says.

The investment comes at the end of a year-long procurement process led by Chris Schofield, procurement director at Thomas Hardie Commercials.

He said: “As a commercial vehicle dealership, it’s incredibly important for us to demonstrate our commitment to improving efficiency and reducing our environmental impact. Electrifying our company car fleet is a fundamental way of achieving this.

“After detailed research, Volvo came way ahead of any other car manufacturer on our user-chooser list in providing not just the eco standards we demanded, but also unrivalled safety features and significant benefit-in-kind (BiK) advantages for our drivers.”

The emissions efficiency of the plug-in hybrid XC40 delivers significant cost-of-ownership benefits, including a BiK tax rate for business/company car drivers of just 12% from April 6th, 2020, says the carmaker.

For a 40% taxpayer, this means a monthly tax bill starting from £163, while the base figure is just £82 for lower-rate taxpayers.

Underlining the appeal of the Volvo brand, two thirds of Thomas Hardie Commercials’ staff replacing their company car this year have opted for the plug-in hybrid XC40, with some choosing to upgrade at their own expense.

Rybrook Volvo in Warrington was instrumental in helping Volvo Car UK secure the order. Its proactive approach, including the provision of vehicles for viewing at Thomas Hardie Commercials management and user meetings, helped ensure the Volvo was chosen over rival brands, it said.

Steve Beattie, head of fleet and remarketing at Volvo Car UK, said: “Like Thomas Hardie Commercials, safety and the environment are core values to us at Volvo.

“We are delighted that our plug-in hybrid technology will play a part in Thomas Hardie reaching its corporate objectives. Staff will also make significant cost savings, while enjoying driving a highly specified, award-winning car.”

In line with Volvo Cars’ new naming strategy, which will shortly see all its plug-in models branded Recharge, the Twin Engine name will make way for Recharge on all the company’s plug-in hybrid cars in the coming weeks.