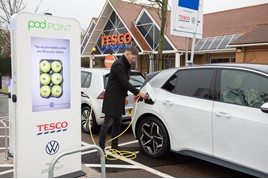 Tridos Bank UK has provided its first finance to support the development of electric vehicle (EV) charging infrastructure with a loan to Pod Point.

Alongside funding from Tesco and Volkswagen, the debt facility will help hundreds of EV charge points to be supplied, operated and maintained by Pod Point at 600 Tesco stores.

The new points will include 7kW media chargers capable of displaying advertisements on a screen, where EV drivers will be able to charge for free. Some sites will also have 50kW rapid chargers priced in line with market rates.

The Pod Point partnership with Tesco and Volkswagen announced in 2018, created a new sponsorship-based business model for EV charging. Tesco has set a goal to increase its business-wide energy sourcing from 65% renewables in 2020 to 100% in 2030.

Philip Bazin, head of the environment team at Triodos Bank UK, said: “Given our focus on sustainable and responsible finance, it is fundamental to Triodos to support projects, such as charging infrastructure for electric vehicles, which help us transition to a low-carbon, clean future.

“The transport sector now has the highest greenhouse gas emissions of any industry in the UK with passenger car road transport accounting for over 50% of these emissions. We need the vision and capabilities of pioneering companies like Pod Point and mainstream businesses like Tesco wanting to deliver the change in our transport infrastructure that we need to see.”

Pod Point chief executive officers and founder, Erik Fairbairn, said: “We are witnessing a pivotal moment for the UK’s rapidly expanding public charging network. Through our partnership with Tesco and Volkswagen we are rolling out smart, easy-to-use charge points at a scale that is going to accelerate EV adoption in ways we haven’t seen before and make it easier than ever for drivers to go electric.

“In Triodos, we’ve found a bank that shares our vision of a world where travel doesn’t damage the earth and who can help us achieve our mission to put a charge point everywhere you park.”

EDF offers its ‘Go Electric’ vehicle tariff, which allows people to lease an electric vehicle while utilising lower off-peak electricity rates. With the acquisition of Pod Point, the company says it will be able to provide charging solutions to more people.

Pod Point has more than 69,000 charge points in the UK and Norway and is an official charge point supplier for car brands in both countries.

EV drivers can charge for free at Tesco

Electric vehicle (EV) drivers at 100 Tesco stores across the UK are now able to top up their battery for free while shopping.