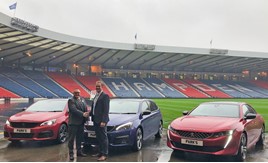 The new vehicles include, two Peugeot vans (one Expert and one Boxer), three 308 GT Line models and eight 308 SW models.

All vehicles were supplied through franchised dealer Park’s Peugeot, which operates dealerships in Bathgate and East Kilbride.

The cars are powered by the Peugeot 1.5 Blue HDi 130 engine with a mix of both six-speed manual and EAT8 eight-speed automatic transmission.

All cars are covered by Free2Move Lease three-year contracts, covering annual distances between 20,000 and 35,000 miles as required.

Scottish FA chief executive Ian Maxwell took delivery of the cars at Hampden Park, which serves as the national stadium for football in Scotland.

“We are delighted to have the support of Free2Move Lease which will provide our coaches with the use of a fleet of low-emission Peugeot vehicles as we aim to inspire a nation to love football.

“We look forward to working with Free2Move to provide our coaches with eco-friendly, efficient travel options as they drive the next generation of players to the next level.”

Mark Pickles, general manager, Free2Move Lease UK, said: “We are very proud to be funding this important supply agreement for the Scottish FA.

“We have put together a package to fund the cars over a three-year time period helping to ensure that the Scottish FA can carry out its important coaching work using stylish, safe and modern low-emission cars.”

Free2Move Lease has become a supplier on the recent All Wales Framework Agreement.