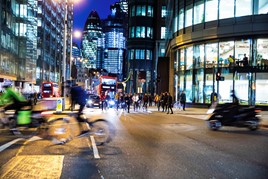 In a survey of fleet decision-makers, conducted after the lockdown was implemented on Monday, March 23, the scale of COVID-19’s impact on the industry has been laid bare.

Some suggest that as many as nine million employees are being furloughed. Initial figures from the Government showed that 140,000 companies had applied to the Government scheme on behalf of one million workers, within a few hours of the scheme opening.

Furloughed staff and those working from home has significantly impacted the number of vehicles being driven during the coronavirus crisis.

Almost three-quarters (72.6%) of respondents to the Fleet News survey said less than 10% of their company cars are being driven for work.

Any semblance of normality was reserved for just one-in-20 fleets, which said more than 75% of their company car drivers were still on the road.

The impact on van fleets is equally significant, but, due to increases in demand from different parts of the economy, such as home deliveries, fewer vans as a proportion of overall fleet operations are standing idle, the research suggests.

Nevertheless, two-thirds (66.7%) of respondents said that less than 10% of their van drivers were working, but almost one-in-five (18.8%) said between half and three-quarters of their drivers were on the road.

For more from the Fleet News survey and how the fleet industry is responsding in these unprecedented times, read the full story in our latest digital edition.

The GeniePoint Network will be free to use for all key workers during the COVID-19 crisis, Engie has announced.

The AA has rescued nearly 2,000 NHS workers since it launched a free breakdown service to help them during the coronavirus pandemic.