MOT extended for 3m cars and vans under lockdown 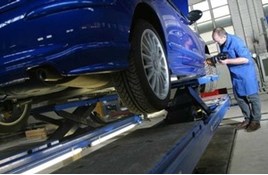 A Freedom of Information (FOI) request submitted by MoneySuperMarket has revealed that more than 3m (3,025,345) cars and vans had their MOT extended since March 30.

MOTs are automatically being extended by six months if it was due to expire on or after March 30 and if its eligible. However, it has recently been updated on May 27, that a MOT extension will no longer apply if you take your vehicle for a MOT and it fails. Your vehicle will need to be fixed and pass its MOT before you can use it again.

The Driver and Vehicle Standards Agency (DVSA) highlights that safety remains its top priority and drivers are at risk of prosecution if found to be driving unsafe vehicles. Vehicles must be kept in a roadworthy condition and garages remain open for essential repair work.

Car servicing and repair company, Kwik Fit, has said it expects to see a significant demand in MOT requests post the six-month extension period, as current trends suggest that most drivers will wait until the MOT extension is over before arranging for their MOT to be completed.

As a result, there will be a significant demand for MOT tests in October, November and towards the end of 2020, putting pressure on capacity, the company says.

According to statistics provided by MoneySuperMarket, of all MOTs due this year, 18% were due in April and May. Data based on drivers using the MoneySuperMarket car monitor, showed that October is expected to be the busiest month as 15% of all MOTs are due in within the month.

However, Kwik Fit says it is taking measures to increasing capacity at more than 500 MOT test centres across the UK and would encourage drivers to book the MOT in advance of the extended due date, especially if the vehicle is being used more regularly during that time.

Kwik Fit estimates that 25% of fleet drivers who could have deferred their MOT have still had a test on their vehicle. However, most drivers it would have expected during the weeks since the introduction of the MOT extension have chosen not to visit, due to the restrictions in place for lockdown.

New research by Kwik Fit also revealed that almost 1.1 million unroadworthy vehicles are set to return to the roads as lockdown begins to ease. An estimated 1,096,000 vehicles which would have received a six-month extension, would have failed a test with dangerous or major defects had they undergone a MOT.

Dan Joyce, fleet director at Kwik Fit, said: “Of the fleet vehicles which received an automatic extension, our experience tells us that around one in five would have failed a test if they had received one.

“Therefore, our on-going message to drivers whom have been using their vehicle or will now start to use their vehicle again whilst lockdown restriction are eased over the coming weeks and months, is to consider the roadworthiness and general condition of the vehicle prior to using it again more regularly.”

Kwik Fit have continued to offer MOT slots throughout its network during the MOT extension period and says that although volumes have significantly reduced during this time, it has seen some demand for MOT’s from key workers and people using their vehicles to continue with essential journeys during lockdown.

But despite the MOT extension, three quarters of a million tests were still carried out in April, figures from Motorway.co.uk have revealed.

A Freedom of Information (FOI) request to the Driver and Vehicle Standards Agency (DVSA) made by the car selling comparison website showed that 746,157 MOTs were carried out in April 2020, down 80% on March 2020 – where 3,723,524 motorists took their vehicles for a MOT.

Perth in Central Scotland saw the biggest drop in MOTs last month, with tests down 85.7%, in comparison to March. Inverness saw 85.6% fewer MOTs in April, than in March. 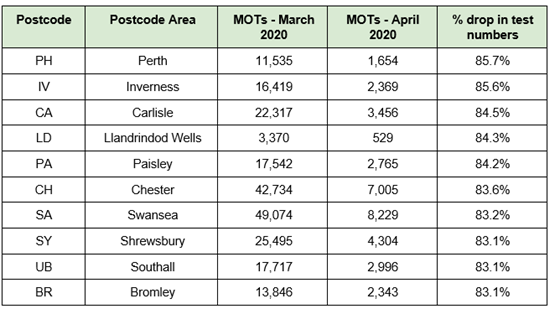 Alex Buttle, director at Motorway.co.uk, said: “These figures from the DVSA show that despite motorists having the opportunity to postpone their MOT test, many have chosen not to do so. There could be several reasons why; with general car maintenance, ongoing value and safety issues likely at the forefront of many drivers’ minds.

“Saying that, the number of MOTs in April was still substantially lower than March figures, and we expect to see a similarly low level of testing in May, as lockdown restrictions have only been eased slightly this month.”

The UK automotive aftermarket sector has signalled its readiness to cope with increased demand for MOT tests, service, maintenance and repair with the publication of Covid-19: Industry Guidance and Best Practice for Automotive Aftermarket.

Although workshops have been allowed to stay open throughout the lockdown, helping to keep vehicles roadworthy for essential journeys, guidance will help companies of all types and sizes in the aftermarket operate safely while minimising the risk of Covid-19 transmission.

Mike Hawes, chief executive at the Society of Motor Manufacturers and Traders, said: “It is timely that the aftermarket can assure customers and colleagues that it is ready to re-open safely to ensure workers’ vehicles remain roadworthy.”

The best-practice guidance covers the entire aftermarket sector, including workshops, warehouses, mobile operations and parts distributors and covers every aspect of their operations, from clear communications with customers and colleagues to social distancing, sanitisation and hygiene, and collection/delivery of vehicles from vulnerable owners.

It is designed to complement government advice and help the aftermarket sector demonstrate safe practices for employees and customers across all points of interaction. It comes as vehicle mileages start to climb and the sector calls for an end to the six-month MOT extension.

Hawes said: “With government advice stating that workers should avoid public transport when returning to work, the use of private cars is likely to rise more sharply than it already has over recent weeks. Given many of these vehicles have been idle for weeks, a reconsideration of the six-month MOT extension needs to be made as soon as possible.”

The vital role of the aftermarket sector in supporting safe mobility of the UK workforce has been underlined as the IMI echoes the SMMT call for the six-month exemption to be scrapped.

Steve Nash, chief executive officer at the Institute of the Motor Industry, said: “There are serious risks in the extension remaining in place now. If vehicles are coming back onto the roads in volume it is vital for all road users’ safety that they are roadworthy.

“The other issue is that if all motorists wait up to six months from when their MOT expired to get their vehicle tested, there is going to be a big backlog of tests in the Autumn and Winter which could significantly overwhelm the sector. That’s without considering the likelihood of the market shrinking because many businesses are unlikely to be able to survive without work coming in.

“The SMMT’s proposal to scrap the extension makes a lot of sense for road safety and will be a vital boost for a currently beleaguered sector.”

For the latest from the Government on MOTs, click here.