Aston Barclay to welcome physical buyers back to auctions 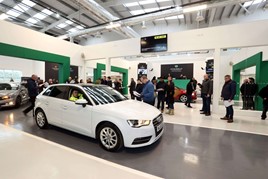 Aston Barclay has announced plans to welcome physical buyers back to its auction halls from Monday (April 12), while following Government Covid-19 measures.

The auction group said its decision to return to physical auctions was supported by a survey of buyers where 84% of 673 respondents (582 buyers) said they would attend future physical auctions.

Aston Barclay said it plans to introduce physical sales gradually, with buyers able to attend dealer part-exchange, Motability, and light commercial sales to view vehicles and bid in the auction halls across its auction network.

Meanwhile, all ex-fleet, leasing and OEM sales will continue online, with buyers being invited to the halls to view fleet and lease stock prior to the sale. OEM stock will remain offsite.

Subject to Government changes on coronavirus tiering, vehicles will be driven through the halls for the first time on April 12 starting with the LCV sale at Donington, followed by dealer sales across the network on the April 13.

“We have been in constant discussion with our buyers and not surprisingly at the lower value end of the market and our LCV buyers requested a return to onsite pre-sale inspections and being able to bid in the auction hall.

“We are pleased to welcome all buyers back providing they adhere to the strict guidelines we have put in place on site and of course every sale will continue to be open to online buyers.”

Responding to the survey, 76% of buyers said they would buy more used cars at a physical auction, particularly older cars, saying they use the opportunity to carry out their own appraisals before bidding as well as gauging market sentiment in the hall.

However, 21% of buyers said opening physical sales would not influence the number of used cars they bid on, while 3% said they would buy fewer cars at a physical auction.

Vendors were also surveyed and 100% said they would attend physical sales to represent their brand on the rostrum, with 73% stating that returning to physical would influence the number of vehicles they sell at auction.

Vendors also said physical sales enable them to gauge the atmosphere and overall used market in the auction hall.

As part of Aston Barclay’s back to physical plans, all buyers attending the new sales will need to adhere to the following rules:

The 600 IMDA members will have access to Aston Barclay’s six auction centres with IMDA stock being branded as part of weekly dealer sales held at each site.