Current lockdown restrictions are masking new car supply issues caused by post-Brexit trade deal with the EU, according to Cox Automotive, while the used car market continues to outperform expectations.

Philip Nothard, insight and strategy director for Cox Automotive, says that trade with the EU is proving far from frictionless and industry leaders suggest there is no easy fix.

The has been compounded further, according to Nothard, by a global microchip shortage which continues to hamper an increasing number of manufacturer production lines.

“The disruption will soon impact new vehicle supply in the global market,” he said.

Meanwhile, the new car market continues to struggle after a 39.5% drop in registrations last month and early signs point towards a similar decline in February.

“As a result, the March new plate has become increasingly crucial for the sector, however 75% of dealers in a recent Cox Automotive survey have indicated that new car orders for March are down year-on-year between 10 and 50%,” explained Nothard.

“Q1 is a critical period and it's vital that showrooms are able to re-open as soon as possible. Still, it's encouraging to see many retailers have quickly adapted to the current conditions and perform well against the odds.”

The used car market continues to prove its resilience compared to the new car market. While used car sales fell 14.9% to 6,752,959 in 2020, the sector actually outperformed expectations with a partial recovery towards the end of the year.

BCA reported a “sold start” to the year as used car values rose despite a third lockdown. Average used car values improved by £154 (1.9%) to £8,464 at BCA during January, the third highest monthly average value recorded since the onset of the pandemic.

BCA’s chief operating officer for UK Remarketing, Stuart Pearson, explained: “While it hasn’t been the January that most in the industry would have hoped for, performance has been solid across most sectors and BCA has seen record numbers of buyers joining our online sales.”

It says that the auction market started 2021 relatively slowly as dealers had stock left over from the Christmas rush that never happened.

“The independents held up the used market in January and we expect a similar trend in February and into March.

"They are still selling stock and the general demand for £3,000-12,000 used cars lies firmly in their sweet spot, although this price band is widening every week.”

Stock outside of this price bracket has been less desirable with alternative fuel vehicles (AFVs) taking the biggest price hit. AFV prices fell by 16.9% (£2,403) to £11,805 in January while diesels also fell back during the month, as a result of demand for specific fast retailing stock.

There are distinct signs in the UK and across Europe of an oversupply of battery electric vehicles (BEVs) caused by over pricing, which has also impacted stock turn, according Indicata’s monthly Market Watch insights report.

Nevertheless, Aston Barclay says that the used car market remains in a good place and while CAP has marked its prices down by nearly 3% over the past two months they are still ahead of where they were this time last year.

However, Aston Barclay’s managing director for customer, Martin Potter, is not expecting a big upsurge in prices similar to what was experienced at the end of the first lockdown in June, 2020.

“We are not encouraging vendors to hold back ex-fleet cars in the hope they will see a massive hike in prices post lockdown that were experienced last summer,” he said.

“We do not expect the used market to collapse, but instead return back to a more seasonal norm as we move further into 2021.

“Prices should remain consistent into Q3 as we don’t anticipate new car sales getting back to full strength and deliver its usual volume of dealer part exchanges into the used market.”

Aston Barclay is expecting its first raft of repossessions arriving in the coming weeks which spells good news for finance companies as it coincides with a high demand for sub-£12,000 retail cars.

“Repossessions will provide a good source of used stock over the coming months. Supply and demand will be nicely balanced which should keep prices consistent,” he added. 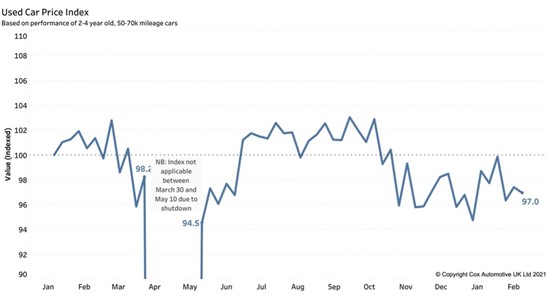 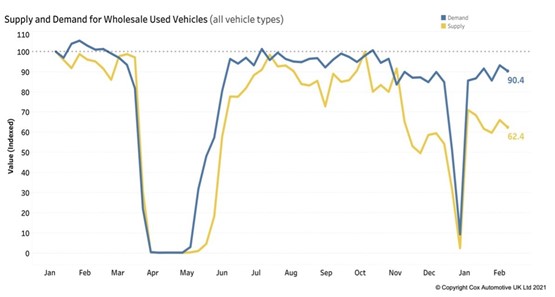 Cap HPI has reported a 1.4% decline in used car values during January, as a result of falling demand.

Autorola UK is offering a white label version of its online wholesale used car sales portal to support the disposal of used vehicles.

The UK’s used car market fell by 14.9% in 2020, according to new figures released by the Society of Motor Manufacturers and Traders (SMMT).