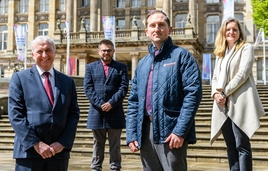 Birmingham City Council has launched a vehicle scrappage and travel credit scheme ahead of the opening of its clean air zone (CAZ) on June 1.

The £10 million package aims to support people working in the city’s clean air zone, and who earn less than £30,000 per year, with the option of scrapping a vehicle that would otherwise be subject to the daily fee.

In return for scrapping a vehicle, successful applicants will receive a £2,000 grant which can be used on a ‘travel credit’ or to purchase a vehicle that meets the emission standards of the new CAZ.

Birmingham City Council has partnered with Transport for West Midlands (TfWM), part of the West Midlands Combined Authority, and car retailer Motorpoint, to operate the scheme.

The travel credit can be applied to a TfWM Swift Card which is redeemed against public transport travel on trains, buses and the Metro. Alternatively, the grant can be used to purchase a CAZ-compliant vehicle from Motorpoint’s branches in Aston and Oldbury.

Councillor Waseem Zaffar, Birmingham City Council’s cabinet member for transport and the environment, says that the CAZ will help improve air quality in the city.

“The vehicle scrappage and travel credit scheme helps tackle the source of the problem by removing the most polluting vehicles from our roads,” he added.

“We also need to encourage more people to use public transport as an alternative to the car, especially for shorter journeys, and that is why I am particularly excited by the partnership with TfWM.”

Birmingham’s CAZ will cover an area of the city inside the inner ring road (A4540 Middleway) and once live will mean that the owners of non-compliant vehicles, which account for around 25% of the vehicles on Birmingham’s roads, will need to pay a daily charge to drive into or through the CAZ.

It was meant to introduce a CAZ last year, along with Leeds, but both were postponed until 2021 due to the coronavirus pandemic.

Cars, taxis and vans will pay £8 per day to drive into the CAZ in Birmingham, while HGVs, coaches and buses will be charged £50 per day.

Those interested in the new vehicle scrappage and travel credit scheme will be able to submit an application and if approved, will be passed to Motorpoint to arrange for their vehicle to be scrapped.

Once the old non-compliant vehicle has been scrapped by Motorpoint, the applicant will then receive £2,000 credit off the price of a car from Motorpoint, or a £2,000 credit on a Swift travel card to be used on West Midlands trains, buses and Metro.

The Swift travel card credit can be shared among family and friends if required and will typically cover the cost of an average commute for two to three years.

Councillor Ian Ward, in his capacity as West Midlands Combined Authority portfolio holder for transport says that the new Swift card offer represents a “golden opportunity” for people to make that shift from car to public transport.

The vehicle scrappage and travel scheme is open to people who live outside of the CAZ and who meet all of the following criteria:

Concerns surrounding CAZs have been highlighted as two of the top three issues that car and van fleets believe they will face before 2026.

Findings from Arval Mobility Observatory’s 2021 Barometer show that the top most common answers to the question, “What are the main challenges facing fleets in the next five years?”, were firstly the introduction of stricter CAZs (35%), followed by increased vehicle taxation (34%) and then the creation of more CAZs (30%).

For more on which cities are planning clean air zones, click here.

Venson Automotive Solutions is supporting this year’s Clean Air Day (October 8), with a survey by the company revealing that 47% of people want to play their part in reduction pollution by tackling traffic emissions.