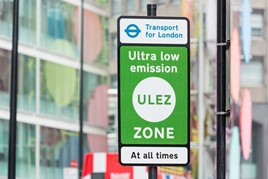 AA Smart Lease offers inclusive car leases that cover the cost of insurance, servicing, maintenance and tyres. No deposit is required and the new car can be delivered to the customer’s home during the current lockdown restrictions.

London’s ultra-low emission zone (ULEZ) is set to expand in October, with a daily charge of £12.50 and Birmingham drivers will have to pay £8 daily charge for driving a non-compliant vehicle into the city centre.

Those who chose the option to lease an inclusive electric car from the AA can do so for a similar daily cost to the London ULEZ charge, it says.

Edmund King, AA president, said: “Later this year, millions of drivers in London will find themselves on the wrong side of the road when the ULEZ scheme is expanded.

“There is a very real risk that many people who rely on their car for essential journeys will be priced off the road.

“With the whole country back in lockdown, this is likely to have an even bigger impact than previously thought as more people will be trying to avoid public transport by using private cars.

“For those drivers who were already considering the switch to electric, being able to lease one which includes the insurance, service and repairs, for a similar cost to paying the charge, could be a lifeline.

“It enables them to dip their toe into running an electric car, without any upfront costs, – as well as helping improve air quality.”

London’s Automatic Number Plate Recognition (ANPR) cameras have picked up a non-compliance rate of 16% among petrol vehicles and 42% among diesel.

Add the 91,200 non-compliant cars in outer London boroughs of Barnet, Brent, Greenwich and Waltham Forest, where large swathes are within the expanded ULEZ, the total number of affected cars owned by London residents is between 250,000 and 300,000.

Venson Automotive Solutions is supporting this year’s Clean Air Day (October 8), with a survey by the company revealing that 47% of people want to play their part in reduction pollution by tackling traffic emissions.