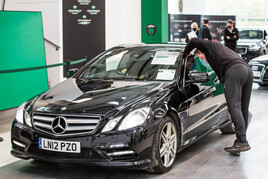 Aston Barclay has reported increases of more than 40% in the first nine months of 2021 across three sectors of the used market.

“Dealers have had some tough market conditions to contend with since March 2020, but they have got progressively more difficult in Q2 and Q3 2021,” said Martin Potter, Aston Barclay’s managing director for customer.

“Dealers are having to contend with paying way above book values for stock as well as increasing used car prices while they are on their forecourts due to the speed at which the market is constantly changing.”

Potter added: “We’ve also seen some dealers report unsold stock after 60 and 90 days being sold back into the wholesale market for profit.

“Meanwhile vendors have continued to invest in refurbishing cars to grades one, two and 3 to take advantage of the buoyant market.”

Not surprisingly all fuel types saw a price rise during Q3 with EVs reporting the biggest rise to £22,354. However, volumes of EVs reaching auction are very low, although leasing companies are watching the used market very closely as they report up to two thirds of new car orders are for all electric cars.

“In three to four years we will see a massive increase in EV stock coming to auction,” continued Potter. “Between now and then used prices will settle down to give vendors some of idea of what cars are going to be worth in the new electric age.”

Aston Barclay reported a very healthy September performance as its network has achieved its strongest ever conversion rates with record prices to match.

"The fewer diesels in the market the more prices will increase," Jon Mitchell, Autorola UK

Ex-fleet stock continues to be the star of the show with 100% conversions a regular occurrence and the most recent sale at Donington reporting a price performance average of 111% of CAP Clean.

On a typical £10,000 fleet car, that means fleet vendors have made an extra £1,100 during September although the volume of stock being offered for sale remains at around 60% of pre-semiconductor crisis levels.

That compares with CAP HPi’s reported rise in values for September on a typical three year/60,000 fleet car of 5.9% which is equivalent to £860.

It was a similar story at Autorola, which reported a third consecutive quarterly rise in online used diesel prices as new car sales continue to fall.

This represents a total price rise in 2021 of £4,989, reinforcing a healthy diesel demand at a time when new diesel car sales fell by 43.8% in the first nine months of the year according to the SMMT.

“The fewer diesels in the market the more prices will increase, until such time as diesel fuel is unavailable which looks unlikely anytime soon.”

He added: “There is still a big sector of the driving community that is not ready to go electric or even hybrid, particularly when they cover higher annual mileages or drive large SUVs. Rather than used diesel prices falling in the future we believe they will continue to rise.”

“During Q3 our online ex-lease and rental auctions have continued to deliver 100% conversion rates and there is a healthy fight between buyers to secure used stock at every sale,” explained Mitchell.

Having passed £10,000 for the first time ever in August, average monthly used car values at BCA climbed again during September to reach £11,817.  It is the fourth consecutive month that BCA has reported record used car values.

The substantial rise is the largest monthly increase in average car values ever recorded at BCA and was heavily influenced by the rich mix of stock on offer across BCA’s online sales platforms and the impact of a shortage of new product in the market. Year-on-year, average monthly values are up by 41.3%, the highest annual increase recorded.

The ongoing challenges around new car supply have created a perfect storm of used car demand with many franchised dealers chasing additional volume to supplement their September numbers.

To satisfy increased demand, Sunday sales became a regular event and sold volumes rose by over 6% month-on-month, further emphasising the volume of product being offered through BCA’s online platform and the strength of the used car market.

Focussing in on the weekly data, average values at BCA rose rapidly during August passing £10,000 for the first-time mid-month, then accelerating past £11,000 the very next week.

Stuart Pearson, chief operating officer at BCA UK, said: “The current dynamics seen in the used vehicle sector are very much amplified by challenges around new car supply, and BCA continues to see high levels of buying activity from both franchised and independent dealer sectors.”

More than 70% of auction houses are expecting to see an increase in petrol, diesel and hybrid values over the next month, according to a survey carried out by the National Association of Motor Auctions (NAMA).

Half (50%) of respondents in the survey expect to see volumes of vehicles coming into auction to stay the same over the next month and 35% predict volumes will increase.

NAMA is expecting the market to remain buoyant as we enter the final quarter of 2021 as demand for used cars remains strong.

Renault Group and its subsidiary RCI Bank and Services have acquired an equity stake in Mobility Trader Holding GmbH, to contribute to the development of the heycar platform.