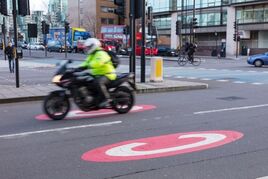 Operating hours on weekends and bank holidays will also be reduced from 12pm to 6pm. The current charge level of £15, however, will be retained after it was raised from £11.50 during the pandemic.

Natalie Chapman, Logistics UK’s head of policy for the South, welcomed the announcement confirming the operational hours of the Congestion Charge will revert back to the original weekday timings.

"This will provide additional flexibility to retime deliveries to less congested times with the potential to reduce emissions, improve the safety of vulnerable road users and increase operational efficiency," she said.

“However, Logistics UK is disappointed that the charges will apply on weekends and bank holidays, and that the £15 charge level will be retained, but the fleet autopay discount removed.

"This simply amounts to an additional tax for logistics businesses who currently have little alternative but to use lorries and vans to keep London stocked with all the goods the population needs.”

TfL launched a consultation on the congestion charge in July, after the hours of operation were extended in June 2020 when the Government had to bail out TfL after a financial crisis caused by the onset of the pandemic.

Mayor of London, Sadiq Khan, defended the changes, saying they "strike a balance" between reducing traffic and congestion and supporting London's economy and residents.

He explained: “The removal of the evening charge will support the capital's culture, hospitality and night-time businesses which have struggled so much, as well as encouraging people to walk, cycle and use public transport.

“It’s vital we do not encourage a car-led recovery and replace one public health crisis with another due to filthy air.”

The Congestion Charge will also be suspended between Christmas and the first working day of the New Year.

Alex Williams, TfL’s director of city planning, said: “These changes are targeted at reducing traffic at the busiest times where we have seen a long-term trend in high levels of car travel.

“We expect to see growth in the number of people walking, cycling and using public transport in central London as a result.

“The removal of the charge in the evening will help shift workers who perform essential roles at the heart of the city and support London’s vibrant cultural and hospitality sectors who are still recovering from the pandemic.”

The Mayor's target is for 80% of trips made in the capital in 2041 to be by walking, cycling or public transport, and the target for central London is 95% of trips to be made by these sustainable types of travel.

The new weekend charging hours are targeted at reducing congestion at the busiest times.

Weekend car and private hire traffic before the pandemic was higher than during the week and made up 70% of traffic in the charging zone on a Saturday and Sunday.

It is estimated there will be an increase in sustainable travel compared to before the pandemic, with around 8,000 new public transport trips and 3,000 walking and cycling trips each day on the weekend, says TfL.

Other permanent changes being implemented include:

This is to allow for changes to operational systems and to alter the signs that inform drivers of when the charge is in operation.