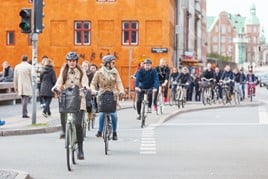 Red Driver Risk Management has produced a downloadable infographic for fleets to send to drivers which explains the changes to the Highway Code.

The updated Highway Code came into effect on Saturday (January 29) setting out new rules for road users and pedestrians.

The aim of the changes is to increase safety for pedestrians, cyclists and horse riders by asking drivers to give these groups more consideration, and is particularly aimed at lorry drivers who, according to the Highway Code, now have ‘the greatest responsibility to reduce the danger posed to other road users’.

Fleet decision-makers fear that the changes could result in a surge of so-called ‘crash for cash’ scams.

“But the Government has been very slow in advising motorists on these new changes, which unfortunately puts emphasis on fleet managers to make sure that their drivers are aware.”

The firm has also issued advice on driving techniques and recommends that drivers waiting to turn while pedestrians cross keep their wheels pointing down the road and only begin to turn them once the pedestrian has crossed.

This is to avoid motorists who are not aware of the new rules hitting drivers who have stopped and shunting them into the path of pedestrians, the firm said.

“The issue with the change in junction priority is that it requires all drivers to be aware that they just wait for pedestrians to cross. Otherwise, it could be a recipe for far more rear end shunts, or disagreements between drivers,” added Goldin.