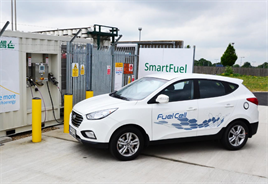 The Government will invest £6.6 million in a network of 12 hydrogen refuelling stations to increase the use of fuel cell vehicles in the UK.

Seven new hydrogen projects have been given the green light:

“As the first global carmaker to begin UK delivers of Fuel Cell passenger cars in 2014, Hyundai welcomes this investment which will support the rollout of hydrogen technology to additional customers.”

Air Products, ITM Power, Johnson Matthey and Transport for London were among the first organisations to take delivery of ix35 Fuel Cell in October 2014, with further customer deliveries imminent.

Hyundai is part of a number of collaborative projects promoting the adoption of fuel cell vehicles in the UK. These include: