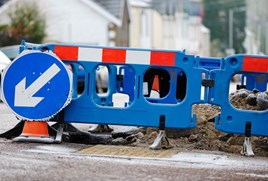 Tough new powers are being called for by councils to ease traffic chaos caused by some utility companies digging up roads.

The Local Government Association (LGA), which represents more than 370 councils in England and Wales, is calling for urgent action from the Government to stop some areas of the country facing gridlock.

The LGA wants it to be easier for councils to be able to introduce lane rental schemes if needed, without the requirement to get approval from the Secretary of State for Transport, which it says is a cumbersome and bureaucratic process.

The lane rental scheme means utility companies, such as gas, water and cable providers, are charged a daily rate for work carried out on key congested roads during busy periods, such as rush hour. This incentivises companies to finish faster.

Revenue raised from lane rental charges would be used by councils to fund measures which help to reduce future road works disruption.

Currently, Transport for London (TfL) and Kent County Council have been the only ones granted approval to run lane rental schemes.

In just the two years since the scheme was introduced in London, it has cut serious and severe disruption from roadworks by almost half. There are also incentives in the lane rental scheme to ensure utility companies get it right first time. Companies that do a shoddy job can be compelled to redo the work – paying lane rental prices again.

Nationally, roadworks cost the taxpayer about £250m annually, which would fill in around four million potholes. Councils spend nearly a fifth of their maintenance budgets - £220m – on tackling poorly done utility streetworks, which reduce road life by up to a third.

Latest Government figures show the country is on the fast-lane to gridlock and forecast an increase in traffic levels of up to 55% by 2040.

LGA Transport spokesman Cllr Peter Box said: "Councils want to do everything they can to help motorists and small businesses by minimising disruption. We have all experienced the boiling frustration of being stuck in rush hour gridlock or had headaches from deafening roadworks nearby.

"Many of our towns and cities could face gridlock at rush-hour unless robust and decisive action is taken right now.

"However, local authorities are being hamstrung by a lack of effective powers to tackle this issue head on. Councils know their areas best and should be able to make decisions about traffic locally. This means they need the option of being able to introduce lane rental schemes without Secretary of State approval, which is time-consuming and bureaucratic.

"The condition of many of our roads is deteriorating while at the same time, more people than ever are using them. The country currently has a £12 billion backlog of repairs and one in five roads is classed as being in poor condition. While most utility companies are responsible and councils want to work with them, a minority do a poor job.

“Expanding the lane rental scheme nationwide would incentivise utility companies to do the job right first time around and help get our traffic moving again.

"With the increasing demand for new and upgraded services and an ageing utility infrastructure there needs to be powerful incentives to ensure utility companies carry out necessary work in the most effective way with the absolute minimum of disruption. The lane rental scheme has been proven to provide this for key roads in London and Kent."