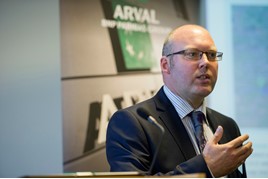 A set of teaching resources covering hydrogen and fuel cell car technology delivered by Arval UK has now been downloaded more than 10,000 times in under a year.

Arval UK developed the project with Hydrogen Hub, with its education pack supporting the chemistry aspect of Triple Science for GCSE students.

The Government-backed project is based in Swindon, where the company’s head office is based, and has now seen its project has now been downloaded 10,000 times.

Paul Marchment, senior business manager at Arval UK, said: “There are now nine company cars operating within the Hydrogen Hub- supported by funding from BNP Paribas- and we’ve been undertaking a comprehensive hydrogen education project this year aimed at schools, businesses and the wider public.

“To see that they have now been downloaded 10,000 times is very encouraging indeed.”

One-day roadshows have seen the project, aimed at businesses, politicians and the general public, visit Swindon, Oxford, Leeds, Birmingham and London so far in 2020.

Just short of 900 delegates have attended the one-day events that have showcased the advantages of hydrogen vehicles and have been able to try out the fuel cell cars for themselves.

The Hydrogen Hub launched in January 2016 and has since driven over £1.5 million of external investment in hydrogen and fuel cell projects in the region with over 50 different organisations participating in working groups and projects.

The Arval UK teaching resource is available to view and download on the teacher resource website, TES, via the following link.

Fleets continue to play a vital role in driving down vehicle emissions, Arval UK recently revealed, with new data showing the improvements being made.

More than 50% of global consumers say they are now willing to consider electric/hybrid vehicles at their next purchase, according to the Global Automotive Disruption Speedometer report by OC&C Strategy Consultants.

The UK’s most dependable new and used cars are hybrid and electric, says a survey undertaken by What Car?