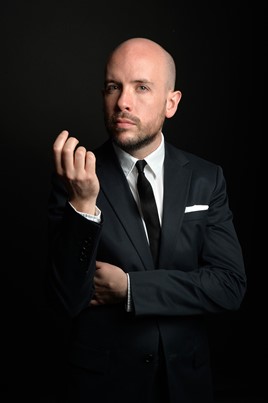 Our 2020 after-dinner entertainment, Tom Allen, is a comedian, presenter, writer and actor whose camp, acerbic wit is as sharp as his suits.

As well as regular panel show appearances, he is the co-host of Channel 4’s Bake Off: The Professionals.

Finding sometimes unlikely humour in leisure centres, the institution of marriage, and the school gym, with impeccable timing he leaves audiences hanging on the eyebrow he’s raised in anticipation of the punch line.

Since winning both the BBC New Comedy and So You Think You’re Funny awards in his first year as a standup, Tom has gone on to perform around the world.

As well as his own tour he’s supported Sarah Millican live. On TV he’s appeared on Live at the Apollo, 8 Out of 10 Cats, Mock the Week, and The Great British Bake Off’s Extra Slice.

Tables and tickets are still available if you would like to be part of the evening, so we urge you to contact the Fleet News events team today to ensure you don’t miss out.

The later a table is booked, the further back in the venue its position is likely to be.

However, there are also just a few premium tables left which will ensure you are in prime position!

Contact Michaela on 01733 395133, email michaela.brock@bauermedia.co.uk or book online at https://awards.fleetnews.co.uk/booking