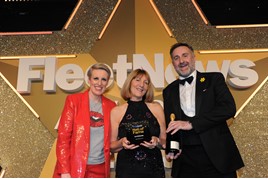 Fleet News Hall of fame member and Logistics UK’s fleet manager Liz Hollands has retired after 27 years in the industry.

Hollands, who entered the Hall of Fame at this year’s Fleet News Awards in March, retired from her role as executive assistant to CEO and fleet manager at Logistics UK (formerly the Freight Transport Association) at the end of July.

She said: “I was furloughed, like lots of people have been (as a result of the Covid-19 pandemic) and having been widowed nearly three years ago, it really made me focus on what I wanted to do from here on.

“I realised that I could actually afford to retire and that it was the right time to do it.”

The majority of the fleet work has been outsourced to Logistics UK’s incumbent leasing supplier Marshall Leasing, overseen and managed internally by facilities & procurement manager Sian Brady, and director of HR Emma Emmett.

Hollands’ executive assistant duties have been taken on by another colleague, Lisa Gardiner, who already looked after two other directors.

During her career, Hollands played an active role in fleet representative group ACFO (now the Association of Fleet Professionals). Firstly, as secretary of the ACFO southern region, and then the region’s chair, before serving as an ACFO director from 2006 to 2010.

She was also a long-serving member of the Fleet News Awards judging panel – a role which she said was “such a good experience”.

Entering the Hall of Fame was one of the highlights of her career and fortunately she was able to collect the award in person with the ceremony taking place prior to lockdown.

“It’s very flattering to have been given that award,” she said. “I’ve enjoyed very much working in fleet.

“I got into it a bit by accident but it’s been a lot of fun.

“I’ve met a lot of lovely people, had some great opportunities, driven some fantastic cars and been to some good places.”