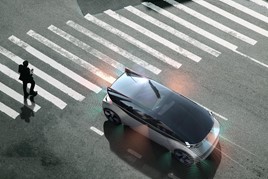 Volvo has developed a system which will allow fully autonomous vehicles to communicate their intentions with human drivers to improve road safety.

It uses a combination of external sounds, colours, visuals and movements to signal to drivers what the vehicle is going to do and aims to help maximise the technology’s potential to reduce collisions.

The manufacturer developed the system as part of its 360c autonomous concept to be a universally applicable standard so other road users do not have to consider the make or brand of individual autonomous cars,

Malin Ekholm, vice-president at the Volvo Cars Safety Centre, said: “We strongly believe this communication method should be a universal standard, so all road users can communicate easily with any autonomous car, regardless of which maker built it.

“But it is also important that we do not instruct others what to do next, in order to avoid potential confusion.

“Our research shows this is the safest way for fully autonomous cars to communicate with other road users.”

The 360c represents Volvo Cars’ vision for a future of travel that is autonomous, electric, connected and safe.