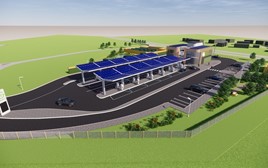 Gridserve has announced partnerships with a number of high street retailers to provide services at its upcoming Electric Forecourt near Braintree, Essex.

The hub, which is due to open in November, will be the first of more than 100 sites built by Gridserve in the next five years as part of a £1 billion programme.

It will allow up to 30 EVs to be charged simultaneously with high power chargers that can deliver up to 350kW of charging power.

The retail partners who will be on site will be WHSmith, Costa Coffee, Post Office, Booths and Gourmade, allowing customers to shop while their vehicles charge.

Toddington Harper, founder and CEO of Gridserve, said his company’s vision is to make EV charging as simple and stress-free as using petrol stations, but with a radically improved customer experience.

He added: “Our UK-wide network of over 100 customer-focused Electric Forecourts will eliminate range and charging anxiety by making it easier and cheaper to charge an electric vehicle than to fuel a petrol or diesel alternative.

“The UK’s first Electric Forecourt, represents so much more than an electric equivalent of a modern petrol station – it will deliver a fully loaded customer experience, offering the Best of British retail and customer service to cater for a full range of consumer and driver needs.”

It will also include an education centre to showcase electric vehicles, providing people with the confidence, knowledge and support to transition to an all-electric future.

Twenty-four of the Electric Forecourt’s high power chargers - half of which can deliver up to 350kW of power - are provided by Swiss-Swedish technology giant ABB, and will be able to charge every electric vehicle on the market today.

In addition, there are six Tesla Superchargers specifically for Tesla vehicles, which is a format that Gridserve plans to replicate or enlarge with Tesla at other sites in the future.

It has already secured exclusivity at 100 sites along busy routes, near powerful grid connections and close to populated areas or transport routes. Planning applications for two additional sites in Uckfield and Norwich East, have been submitted.

Gridserve has also partnered with Hitachi Capital UK to offer simplified EV solutions that reduce upfront costs and have charging included in monthly costs designed to bring the cost of using electric vehicles below the overall costs of using petrol or diesel cars.

Hitachi Capital (UK) and Gridserve have entered a partnership which aims to create the infrastructure to accelerate the adoption of electric vehicles.